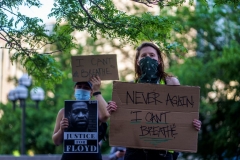 (CNSNews.com) - Former Rep. Trey Gowdy (R-S.C.), a former federal prosecutor who served as chairman of the House Oversight Committee, told Fox News on Thursday that George Floyd’s death while being arrested by Minneapolis police was “murder.”

“I can tell you, take the uniform off of that police officer. Just have a man with his knee on another man's neck. There’d already be an arrest, and I don't need to wait on the feds. This is a violation of Minnesota state law. This is murder. It's either murder 1, 2, or 3 under Minnesota law,” Gowdy said in an interview with “The Story with Martha MacCallum.”

“So I’m happy that the feds are investigating civil rights violation, but you can take all the time you want for that. There’s really no reason that this officer has not already been charged with either murder 1, 2, or 3,” Gowdy said, and he has “no idea” why.

“I mean I watched the video. I discussed it with [Sen.] Tim Scott, my friend, on the way over here, and to see the officer’s hand in his pocket. He’s under no threat, no danger. There’s no resistance, and you’ve got a guy literally the life sapping out of him, and it is an inherently dangerous act,” the former congressman said.

“So it may not have been premeditated. Take murder 1 off, but it is murder 2 or murder 3, and I can tell you in South Carolina somebody would already be arrested, and if it weren't a cop, if it was just another person killing someone in the street, asphyxiating them, there’d already be an arrest. You have to ask Minnesota why it takes that long to process a video? It's pretty clear to me,” he said.

When asked whether there was anything on any of the videos of Floyd’s arrest that would indicate something other than murder, Gowdy said, “No. I watched every video you can see. I was a state prosecutor as well as a federal prosecutor. I did a bunch of homicide cases.”

“You know if I was a person of color, I would be wondering how Dylann Roof who killed nine black people in a church in South Carolina can be arrested without incident, but Mr. Floyd under suspicion of passing a counterfeit $20 bill can’t even live through the arrest?” Gowdy said.

“I am not a fan of vigilante justice. I think you’re just creating additional victims and you’re taking away from your argument, but it would do us all well to take a step back and try to see the genesis of this outrage. Dylan Roof is arrested without incident after he murdered nine people, nine black folks in a church in South Carolina, and yet this guy can’t even survive an arrest for a counterfeit $20 bill,” he said.

Gowdy asked why Minneapolis Mayor Jacob Frey allowed an officer with Derek Chauvin’s background of “inappropriate conduct” to remain on the police force.

“I think Bill Barr, this is a state matter, but I hope Bill Barr does get involved, Martha, and the first two phone calls he needs to make to me, or to Tim Scott, and Val Demings. One a senator, one a House member. Val of course is a police chief,” he said.

The former congressman called for “a national conversation” that is “raw” and “frank.”

“We need a national conversation. It needs to be raw, and it needs to be frank, and it needs to be honest, because we are not going to survive with a justice system that communities of color do not have confidence in, and it’s been that way for a long time. We can’t just have this talk after a black man is killed,” Gowdy said.

“We gotta have the talk the day before somebody is killed. Maybe we can prevent the next killing, but we need to have a national conversation, and I would start with Tim Scott and Val Demings, and he can put whoever else he wants on it, but this needs to be an American family conversation, not people putting torches to Target stores in Minneapolis. That ain’t gonna accomplish nothing,” he said.