Gov. Greg Abbott: Texas Will Secure the Border, and the Biden Administration Will Pay for It’ 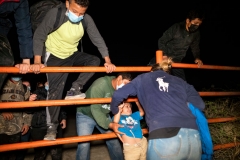 Migrants scale a cattle fence on private property after arriving on the American shores of the Rio Grande River on April 24, 2021 in Roma, Texas. (Photo by Benjamin Lowy/Getty Images)

(CNSNews.com) – Texas Gov. Greg Abbott said Thursday that he has deployed 1,000 Department of Public Safety troops and the National Guard to the southern border to secure it from illegal aliens coming across.

During an appearance on Fox News’s “Red State Trailblazers” town hall event in Orlando, Fla., which featured a host of Republican governors, host Laura Ingraham asked Abbott what his message is to the Biden administration about the number of COVID-positive migrants being released into communities.

“So the COVID-released migrants is one challenge but I gotta tell you this. The Biden first 100 days has been very successful for the cartels, for the drug smugglers, for the human traffickers who are profiteering off of all the migrants who come across the border illegally,” Abbott said.

“Because so many migrants are coming across the border illegally, what it means is that the Border Patrol officers are fully occupying processing all of these migrants, and that leaves open miles of border that the cartels can come across. That's why I launched what is called Operation Lone Star,” he said.

“We have deployed 1,000 department of public safety troops as well as National Guard to our border to secure our border from the people coming across. So here's what we want to do. The deal I want to cut is, Texas will secure the border, and the Biden administration will pay for it,” the governor said.

Iowa Gov. Kim Reynolds has said she will not take migrant children that the federal government tries to place in her state, Ingraham pointed out.

“I push back and say this administration is heartless. They created this crisis at the border. They are putting the children at risk by the policies that they’ve eliminated that we know were working. I'm the governor of Iowa and my number one responsibility is to protect the health and safety Iowans, and it would be irresponsible for me not to be at the forefront of every decision I make,” Reynolds said.