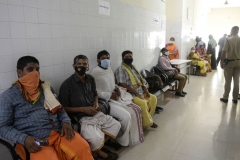 Hindu priests wait to get a dose of the Covaxin vaccine against the Covid-19 coronavirus during a vaccination drive at a health centre in Hyderabad on June 14, 2021. (Photo by NOAH SEELAM/AFP via Getty Images)

(CNSNews.com) – Former FDA Commissioner Scott Gottlieb warned Sunday that the Delta COVID-19 variant that started in India and is spreading in the U.S. could “spike a new epidemic heading into the fall.”

“Look, and it's going to continue to spread. It's concerning. It appears to be more transmissible. There was data out from Neil Ferguson this week showing it's about 60% more transmissible than 1.1.7, which was that old U.K. variant that they're now calling the Alpha variant. So this is more contagious,” the former commissioner told CBS’s “Face the Nation.”

“It appears that people who get this virus have higher viral loads, and they have those viral loads for longer periods of time. So they shed more virus. Right now in the United States, it's about 10% of infections. It's doubling every two weeks. So it's probably going to become the dominant strain here in the United States,” Gottlieb said.

“That doesn't mean that we're going to see a sharp uptick in infections, but it does mean that this is going to take over, and I think the risk is really to the fall that this could spike a new epidemic heading into the fall. The vaccines seem to be effective. The mRNA vaccine seems- seems to be highly effective, two doses of that vaccine against this variant,” he said.

Gottlieb said that the vaccines are effective against the Delta variant.

“The viral vector vaccines from J&J and AstraZeneca also appear to be effective, about 60% effective. The mRNA vaccines are about 88% effective. So we have the tools to control this and defeat it. We just need to use those tools,” the former commissioner said.

Asked whether the variant is responsible for the rise in hospitalizations for 12 to 17-year-olds, Gottlieb said, “Probably not yet. I mean, I don't think that there's enough of this variant. We certainly haven't seen outbreaks with this variant in school-like settings here in the United States yet. Probably what's driving some of the increased infection among kids is 1.1.7. It's also a more contagious variant.

“So it's getting into settings and infecting people who might not have been as vulnerable to the old wild-type variant that came out of Wuhan. So you're seeing a higher rate of infection among kids, and hopefully, we're going to get more kids vaccinated. The vaccines are available right now for kids 12 and above,” he said.

“Hopefully, there's going to be a vaccine available for kids who are younger heading into the fall. Pfizer recently started a clinical trial with a vaccine for younger age population. Moderna is developing a vaccine for that age cohort as well,” the former commissioner added.

Gottlieb said “it’s really unclear” whether we should expect to talk about more variants based on the pattern so far over the next several months.

There's a lot of people who think that this virus has mutated rapidly over a short period of time and reached what we would call new-fitness level, but it's not going to continue to mutate at this rate. It's mutating about at the rate of influenza B right now. So it's mutating as quickly as influenza B. Remember, this virus has to thread a very careful needle.

It's trying to change the spike protein, which is a protein on its surface that we develop our antibodies against in a way that our antibodies no longer recognize that protein, but that spike protein is also what the virus uses to attach to the lining of our respiratory tract. So it can't change it too much or else it no longer can latch onto our cells. So it's trying to thread a very careful needle.

So I don't think we're going to see a situation where we're going to wake up one day like we sometimes see with influenza where all of a sudden our vaccine doesn't work, at least not in the foreseeable future.

“Right now, these cases are clustered in people 18 to 24, men more than women, about 80% of the cases that we've seen in men. There's been about 12 million people vaccinated between the age of 18 and 24. We've found 275 cases. It's not clear that there's a causal relationship between the vaccine and these cases. If there is, it's probably an inflammatory response from the vaccine,” he said.

“We know the vaccine creates an inflammatory response. A lot of these cases have happened immediately after vaccination. The vast majority have been self-limiting. They've been treated with steroids or NSAIDs. In certain cases, patients haven't gotten really sick, and we also have to keep in mind that people, especially young people, are going out more and we're seeing more outbreaks of ordinary viruses.” Gottlieb said.

“There's actually been a spike in respiratory syncytial virus, enterovirus, echoviruses, coxsackieviruses. So it could be the case that as young people get vaccinated, they're going out more. They're exchanging other viruses. We're seeing outbreaks of those viruses and we know those viruses also cause pericarditis,” he said.

"So it's not clear that it's the vaccine or perhaps a change in behavior, but it's certainly something we should be looking closely at because we have to properly inform patients if, in fact, this is a risk,” Gottlieb added.

“It's positional. So it hurts more when you lay back. Sometimes it hurts when you take a deep breath because the pericardium, the lining of the heart, rubs against the chest wall and it might be associated with a fever,” he said.