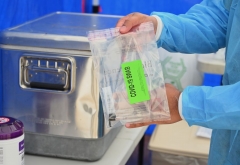 A healthcare worker holds up a COVID-19 swab kit at the Brightpoint Health and UJA-Federation of New York free pop-up coronavirus (COVID-19) testing site on May 8, 2020 in the Brooklyn borough of New York City. (Photo by ANGELA WEISS/AFP via Getty Images)

(CNSNews.com) - Former FDA Commissioner Scott Gottlieb on Sunday said he rejects the notion that the Food and Drug Administration is slow walking vaccines and therapeutics for COVID-19.

“The deep state, or whoever, over at the FDA is making it very difficult for drug companies to get people in order to test the vaccines and therapeutics. Obviously, they are hoping to delay the answer until after November 3rd. Must focus on speed, and saving lives!” Trump tweeted.

Gottlieb, who served the FDA during the administrations of President George W. Bush twice and President Donald Trump once, said the agency is “guided by science and a deeply seated sense of public health mission."

“Well, I'm not sure exactly what he's talking about, but I can tell you about my direct experience at the agency. I served in that agency three times, twice under President Bush and once as the commissioner for two years under President Trump,” Gottlieb said.

“And when it comes to regulatory decision-making in that agency, it's a foundational truth that guides that agency as science and a deeply seated sense of public health mission that permeates that agency. It's a part of the esprit de corps of the staff of that agency, and I know that they know the urgency of the moment,” the former FDA commissioner said.
“They put out 60 guidance documents to find new ways to bring products to the market more quickly. There are 750 drugs under mid or late stages of clinical development, clinical trials right now. So I firmly reject the idea that they would slow walk anything or accelerate anything for that matter, based on any kind of political consideration and any consideration other than what's best for the public health and a real sense of mission to patients,” he added.

Trump said bureaucrats at the FDA don’t see the urgency. When asked what the FDA is being pressured to do, Gottlieb said, “I think a lot of that was about plasma. That tweet, I think the president scoped into that tweet a comment on vaccines, but I will tell you, and I sit on the board of Pfizer, one of the two U.S. companies furthest along in developing a vaccine, the vaccine trials have enrolled very fast.

“Moderna and Pfizer, the two U.S. manufacturers who are the furthest ahead, enrolled 25,000 patients into those trials in the four weeks that those trials have been stood up, and they've really only been enrolling in earnest for three weeks. That's extraordinary. So to say that these products aren't moving at really historic pace I think is wrong,” he said.

“There were delays or perceived delays in bringing plasma, authorizing plasma under an emergency use authorization, was reported this week that NIH had misgivings about FDA going forward with that authorization, but there's reasons people have some questions about that. The trial that that's going to be based on, 70,000 patients, wasn't a very rigorously done trial,” Gottlieb said.

“It was an open-label study where everyone got treated. So it's hard to draw conclusions. I believe plasma is probably beneficial. It's probably weakly beneficial in the setting of this treatment, but I think some people wanted to see more rigorous data to ground that decision,” he said.

“And I think that's part of what is going on here with respect to that tweet and questions about the FDA decision making, but I think the FDA is on firm ground taking their time to try to closely evaluate that information,” Gottlieb said.