GOP Congressman: ‘There Is a Movement Afoot’ Among Parents on Education 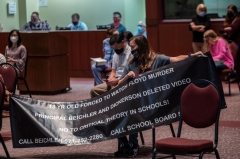 A woman holds up her sign against Critical Race Theory (CRT) being taught during a Loudoun County Public Schools (LCPS) board meeting in Ashburn, Virginia on October 12, 2021. (Photo by ANDREW CABALLERO-REYNOLDS/AFP via Getty Images)

(CNSNews.com) – “There is a movement afoot” of parents speaking out at school boards across the country, who have gone from not knowing who is on the school board to now running for school board, Rep. Rob Wittman (R-Va.) said Tuesday.

“They also too have been very adamant that they want their schools to be able to teach their children not what to think but how to think. Those are things that have resonated across Virginia,” Wittman said of his constituents in Virginia.

“We see those in the national headlines, but they’re in every community across the nation, making sure that parents are empowered,” the congressman said at a Capitol Hill press conference.

“And when they see a letter from the National School Board Association that asks the attorney general of the United States to go after parents who speak out at school board meetings under the Patriot Act and to be treated as terrorists, let me tell you folks, they are deeply concerned about that, and then when the attorney general follows suit and goes to the federal law enforcement agencies and says, by the way, look at these parents and what they’re doing at these school board meetings, what they are practicing their 1st Amendment rights to speak out and to demand that their school systems reflect what’s best for their children,” he said.

Wittman said that’s the “undercurrent that we’re seeing come to the surface now across the nation where parents are saying, I’m sick and tired of it, and I’m not going to take it anymore.”

“That’s where we are today on the education issue, and I believe parents want to make sure that they are in charge of their children. They also want to make sure too that they’re able to choose the best path for their children. That’s why school choice is so incredibly important especially for folks in minority communities that want to be able to escape failing school systems,” he said.

The congressman said that parents are demanding school choice in addition to issues affecting the economy.

“Those are all issues that are incredibly important, and what we’ve seen in Virginia is that they’ve come to the forefront: education, the economy, public safety. All those issues are incredibly important, and I believe as we see the results of today’s election, that’s going to be a bellwether for what people want to see happen across the nation,” the congressman said, referencing the gubernatorial election in Virginia.