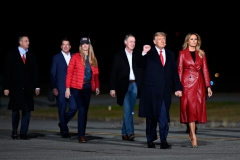 (CNSNews.com) – Georgia’s top election official Gabriel Sterling told NBC’s “Meet the Press” on Sunday that he believes the Democratic opponents to Sens. Kelly Loeffler (R-Ga.) and David Perdue (R-Ga.) “would do more damage to this country” than Republican candidates would.

“I believe that their opponents would do more damage to this country than they would on this particular front and that particular day,” he said.

“The implicit threat was that he would do two tweets and torpedo their campaigns. Do you stand by those comments? Do you really believe that Loeffler and Perdue essentially had to do what Trump said?” host Chuck Todd asked.

“There's nothing else that makes sense, because even their staff were surprised when they put that out. You know, it had been about a week and a half, I guess, since the election had been over, and it's safe to say, it's one of the things they said is that we were not transparent. We were literally doing two press conferences a day and sending out hourly press releases on the count,” Sterling said.

“Nobody has any specific allegation. They just want to keep the Trump supporters whipped up, because they think that's the best path to win the Senate races. I personally think by doing what I had asked and stepping up and saying, ‘This disinformation has to stop. These potential intimidations and violence has to stop,’ they would get more votes rather than less, and I'm still supporting it,” he said.

“I'm a Republican. We need to hold on to the Senate. So I'm still going to vote for them, but I'm not happy with how they conducted themselves in this particular situation,” Sterling said.

“You want to be viewed as somebody who has the highest ethics, highest integrity, particularly in a position that you're in right now with, when it comes to overseeing elections, helping to oversee elections. Do you believe that these folks running as Republicans right now have the same ethical standards that you have?” Todd asked.

“Why don't you give me an easy question, Chuck? I mean, politics is a complicated profession. I said that earlier this week too, and the values and the things you have to fight for, sometimes it gets to be complicated and difficult,” Sterling said.

“I said something difficult on Tuesday to people who are in a position of responsibility who I would hope would show a higher sense of leadership and duty, but at the end of the day, I believe that their opponents would do more damage to this country than they would on this particular front and that particular day,” he said.

“But considering how he's behaved, do you ask yourself, ‘Hmm, maybe he isn't the right person to lead the country, at least if this is what he's going to do to the democracy?’” Todd asked.

“I think that we have this on all sides. President Trump has a higher sense of responsibility, should be held to a higher standard, but we have a governor candidate in this state who still hasn't conceded. We have people who, like I said earlier, believe Russians switched votes. I mean, all sides, Republican and Democrat, have to stand up and do a better job -- the president included and especially,” Sterling said.

He said he believes that Trump is doing damage to the Republican Party in Georgia and that it will cost Loeffler and Perdue their Senate seats.

“When he and his lawyers and even his former lawyers -- some of his former lawyers are literally saying, ‘Don't vote.’ It's mixed messaging. It's confusing, and if you're telling people, don't trust the election system, why would they bother to show up? I mean, the best argument of some people is if you think they're stealing it, show up and vote to make it at least a little bit harder for them to steal,” Sterling said.