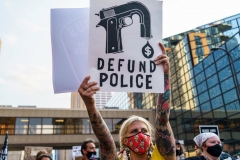 A Protester hold a sign reading "Defund the Police" outside Hennepin County Government Plaza during a demonstration against police brutality and racism on August 24, 2020 in Minneapolis, Minnesota. (Photo by KEREM YUCEL/AFP via Getty Images)

(CNSNews.com) – Violent crime is skyrocketing in major U.S. cities at a rate not seen since the 1990s, and violent crime in 2021 is surpassing the “historic crime numbers in 2020,” National Fraternal Order of Police Vice President Joe Gamaldi said Tuesday.

“I think what you're really seeing is these signs of urban decay that are occurring in our communities, and it's a result of rogue prosecutors and activist judges who have created a revolving door criminal justice policy in all of these major cities. So we have gang bangers,” Gamaldi told Fox Business’s “Mornings with Maria Bartiromo.”

“We have people that are trigger pullers who are getting out on probation after shooting people or they're out on eight felony bonds and then after they shoot someone they get another bond. Combine that with the anti-police rhetoric that seems to permeate every single major city that we have in this country, and it's a recipe for disaster, but this is just the beginning,” he said.

“It's even worse in the cities that decided to defund their police department. They saw increases in murders in Chicago by 34%, in Minneapolis 236%, Portland 137%, New York City 50%, Philly 66%, and the list goes on and on,” he said.

Host Maria Bartiromo pointed out that Rep. Alexandria Ocasio-Cortez (D-N.Y.) is dismissing the rise in crime, saying that the headlines are causing hysteria.

“It's a complete joke. It's like they're trying to tell the American people don't believe their lying eyes. I mean in the same day that the press secretary was saying that it's Republicans that are defunding the police, the Oakland City Council which is Democrat controlled decided to defund the police by $18 million while their homicide rate is up over 87 percent. This is Washington talk,” Gamaldi said.

“And as far as Congresswoman Cortez, I find it funny that she says this is hysteria and these are just statistics. Excuse me, these are actual people who are being murdered - fathers, sons, daughters, mothers - being murdered wholesale in our street, and you've got the nerve to say this is all hysteria? But I think what you saw was the congresswoman said the quiet part out loud, and that is the narrative matters more to them than people's lives,” he said.

“We have a major problem in our cities right now, but the fact of the matter is, the American police officers delivered historic crime reductions in the last 20 years, and it led to an urban renaissance, and we can do it again, if we restore the rule of law, if we prosecute violent crimes and if we embrace broken windows theory and if we get the funding and support from community members and elected officials, we can turn this around,” Gamaldi added.

He added that Ocasio-Cortez failed to consider that by defunding of police, black and Latino communities will suffer the most, because that’s where the violent crime is taking place.

“And you know what the worst part about all of this is? It's members of our black and brown community that are impacted most. Statistically they are the victims of these violent crimes,” Gamaldi said.

“So while she talks about how all these lives matter, apparently they don't matter to her too much because she's not supporting policies that will ultimately be able to impact the crime that is occurring, and I think that realize this is a complete loser, the defund the police for the Democrat Party. Representative Clyburn said that after they nearly lost the majority during the midterms,” he said.

“Not only that. If you look at a recent Gallup poll, 81% of black Americans said they don't want less police officers in their neighborhoods, they want more. In a recent poll in New York City, less than 15% of the black and Latino community want to defund the police. It's a complete joke,” Gamaldi said.