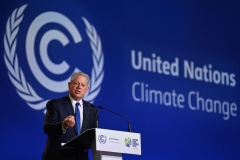 Former US vice president and climate campaigner Al Gore delivers a speech at the COP26 UN Climate Summit in Glasgow on November 5, 2021. Photo by PAUL ELLIS/AFP via Getty Images)

(CNSNews.com) - Former Vice President Al Gore compared so-called “climate deniers” to the Uvalde police officers who waited around while a mass shooter killed students and teachers at an elementary school.

“The United States must step up and provide leadership, and of course, President Biden's been trying to do that, and he has a 50-50 Senate, really a 49-51 Senate on everything related to the climate, and a razor-thin majority in the House,” he told NBC’s “Meet the Press.”

“You know, Abraham Lincoln once said, ‘With public sentiment, everything is possible. Without it, nothing can succeed.’ The rest of us need to step up,” the former vice president said.

“The one thing that Senator Manchin said that I really agree with is that, ‘If we want more pro-climate policies, we need to elect more pro-climate senators and representatives in both parties,’ and we've got an election coming up, and this is time for all of us to step up,” Gore said.

“You know, the climate deniers are really in some ways similar to all of those almost 400 law enforcement officers in Uvalde, Texas, who were waiting outside an unlocked door while the children were being massacred,” he said.

“And confronted with this global emergency, what we're doing with our inaction and failing to walk through the door and stop the killing is not typical of what we are capable of as human beings,” the former vice president said.

“We do have the solutions, and I think these extreme events that are getting steadily worse and more severe are really beginning to change minds. We have to have unity as a nation to come together and stop making this a political football. It shouldn't be a partisan issue,” he said.