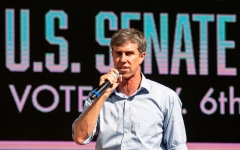 US Representative Beto O'Rourke (D-TX) speaks during a campaign rally in Plano, Texas, on September 15, 2018. (Photo by LAURA BUCKMAN/AFP via Getty Images)

In an interview with MSNBC’s “Morning Joe,” O’Rourke pointed to MSNBC contributor Mike Barnicle’s comments on governance, saying that “it really struck a chord, because in Texas you have an example of what happens when a state is governed by those who do not believe in government to begin with.”

“The Republican Party as you know, Mika, has had absolute control of the state senate, state house, lieutenant governor, governor, every statewide office for the last 20 years, so the decisions to deregulate ERCOT and to ensure that it’s not connected to the national grid, to fail to weatherize our power generators, whether it’s coal or gas or nuclear or wind or solar or the transmission lines that carry that energy to us, the inability to ensure that there’s excess capacity for emergencies like these to power our homes and businesses, these are all decisions that they made,” he said.

“And now of course they are pointing the finger at Congressman [Alexandria] Ocasio-Cortez, the Green New Deal, everyone and everything except for themselves, which does not inspire confidence that we’re going to get our way out of this or learn from these mistakes. We had a terrible winter storm in 2011 that caused similar rolling blackouts across Texas,” O’Rourke said.

“You would have thought 10 years later, with many of the same people in power we would have learned from that mistake, invested in our infrastructure, and kept our fellow Texans safe, but that’s not what is happening in the state right now. Many are left to their own devices and relying upon competent local leaders ... so this is a tough situation, but Texans are tough people, and I think working together, we will get our way out of this,” he said.

O’Rourke said where he lives in El Paso does not have a problem with power outages, because it’s not part of the Electric Reliability Council of Texas (ERCOT).

El Paso, where I am, is not part of ERCOT, which is the electricity grid most of Texas operates under. In terms, Mika, for the rest of Texas, I wish I had better news. It was in the 20s in Dallas and Fort Worth and Houston, and San Antonio last night with many millions without power and millions more under boil water notices which begs the question, if you don't have power, if you don't have electricity, if you don't have gas, how are you going to boil that water if you have any that’s coming out of your faucet?

Many people don't even have water right now, and the utilities are unable to predict with any certainty when folks will have power back. People have been going not hours but days without electricity or being able to warm their homes. Luckily, Texas has warming centers set up that folks can go to. Some of them they can get a hot meal. They can get water, but it's hard if you don't have internet, if you don’t have TV, if you don’t have access to the information sources that will let you do that.

I joined about 100 volunteers last night to make calls across Texas to senior citizens, to connect them with those warming centers with a hot meal, with water if they need it, and other assistance, but we’re going to need more of that if we’re gonna help our fellow Texans in the midst of this crisis.

When asked whether he’s planning to run for governor, O’Rourke said he hasn’t thought about it. If he were governor though, he said he’d do four things to change the way energy is produced and distributed in the state.

One, I would either incentivize or mandate that the power generators in Texas store additional capacity. In this deregulated ERCOT market, there is no incentive and requirement to keep additional capacity for weather emergencies like these and because of our changing climate due to emissions and excesses, and inaction, we are likely to see more severe storms and droughts and natural disasters that will require that capacity. So let's make sure that it's there.

Second, I would connect ERCOT and the rest of Texas to the national grid so that when we have excess power, we can sell it to the rest of the market and plow those profits back into weatherizing and improving the generation transmission in Texas and when we’re in an emergency like this, we can draw down power from the rest of the country.

Third, I would require those generators to weatherize their systems, which is what we should have done after the freeze in 2011 and what we should absolutely do right now, and the fourth and perhaps the most important thing, I would take the science and climate change seriously.

I would protect the most vulnerable communities and then I would invest to make sure Texas is the leader for the country in redesigning our energy and electricity systems to make sure that we arrest the changing climate before it is too late because after Hurricane Harvey, after the severe droughts in the panhandle, after this storm in 2021 that we are not out of yet, we should know by now this is our future unless we change our course. So those are four things that we could do as Texans.

Asked to give his reaction to the Capitol Hill riots that took place on Jan. 6 in the nation’s capital, O’Rourke said, “It tells me that unless we hold those responsible accountable for what they did - yes, that means Donald Trump, but it also means the junior senator from the state of Texas who I understand is vacationing in Cancun right now, when people are literally freezing to death in the state that he was elected to represent and serve, when Ted Cruz helps to incite that sedition, seeks to overturn a lawfully legitimately democratically decided election, he is just as culpable for the insurrection, the coup attempt, the deaths, including of Capitol Police officers who are trying to defend his life and the lives of others who serve in our capitol.

“If these folks are not held accountable, if Ted Cruz is not expelled, he’s not forced to resign, then what you have done is you have set the precedent that it is okay to try to overturn an election, to try to overturn our government, and the proudest democracy on the face of the planet will become a memory if we do not fight for it right now," he said.

O’Rourke also compared Trump to Nazi dictator Adolf Hitler and the Capitol riots to Hitler’s initial failed attempt to takeover the government in Bavaria, a state in southern Germany in 1923.

“So we should take no comfort in the fact that Joe Biden was successfully sworn in, no comfort in the fact that Congress seems to be operating as normal. This thing is on a roll right now, and if you look at the Beer Hall Putsch in Germany in 1923, it was 10 years later that Hitler is chancellor. We are operating under the big lie right now in America. We've got to stop it, and that’s up to all of us in this great democracy,” O’Rourke said.