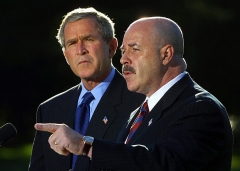 (CNSNews.com) – Former New York City Police Commissioner Bernard Kerik told C-SPAN’s “Washington Journal” last week that his biggest fear used to be global terrorism after the 9/11 attacks, but now it’s “this surge of socialism” being pushed in taking over towns like what happened in Seattle.

“So I used to say to people, you know, somebody would ask me: what do you think the greatest threat is against this country as a law enforcement officer, and I would say, my biggest fear right now is global terrorism,” he said on Friday.

“That’s what I used to say, and I believed that as somebody that oversaw the aftermath of the attack on New York City on 9/11, the aftermath of that attack, what we’ve gone through since with regard to terrorism, I strongly believe that, but I have to tell you today, that’s not my biggest fear for this country,” Kerik said.

“My biggest fear is this socialist, communist movement if you will, this surge of socialism that they’re trying to push in this country to diminish the Constitution, diminish people’s rights, to take over towns like what’s happened in Seattle,” the former police commissioner said.

Kerik criticized those calling for the defunding of police, pointing to cities with high murder rates, saying that minority communities would be the ones to suffer if such a proposal were to come to fruition.

“Things like this, it’s extremely frightening, because the people that lose, especially you know, they’re calling for the diminishment or the defunding of police, when you think of a town like Chicago or Baltimore, St. Louis where they’re having murder numbers at the rate of a war zone, do you really want to eliminate the police in those towns?” he said.

“Who suffers? The minority communities, and I think people have to stand up, change their political leadership if they have to, yell out, go public, do whatever you have to do, but that kind of stuff has got to stop,” Kerik added.