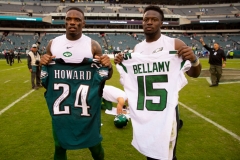 Josh Bellamy #15 of the New York Jets and Jordan Howard #24 of the Philadelphia Eagles pose for a picture after a jersey swap at Lincoln Financial Field on October 6, 2019 in Philadelphia, Pennsylvania. (Photo by Mitchell Leff/Getty Images)

(CNSNews.com) - The Justice Department announced Thursday that it has charged 57 people with defrauding the Paycheck Protection Program - the program designed to help small businesses affected by the coronavirus pandemic - to the tune of $175 million.

Brian Rabbitt, acting assistant attorney of the criminal division, called it “a key milestone” in his division’s efforts to “combat pandemic-related fraud by holding accountable those who sought to abuse the PPP.”

“Experience has taught us that anytime the federal government makes a large amount of money available to the public on an expedited basis, the opportunities for fraud are unfortunately clear,” he said.

A member of that ring was former New York Jets wide receiver Joshua Bellamy, who was arrested Thursday morning.

“And just a few hours ago, charges were unsealed against seven other individuals alleged to have been part of a separate criminal ring that tried to steal and launder several hundred thousand dollars in stolen PPP funds,” Rabbitt said.

“These defendants used lies to obtain millions of dollars in PPP funds and then spent those funds not on their workers, but on things like luxury cars, homes, renovations, diamond jewelry, even adult entertainment and trips to Las Vegas,” he said.

Bellamy, who signed a $5 million contract with the Jets last year, suffered a season-ending injury to his shoulder and began the training camp on the injured list. On Tuesday, he was released from the Jets’ physically unable to perform (PUP) list, ESPN reported.

He was charged with fraud, bank fraud, and conspiracy to commit wire fraud and bank fraud.

According to the DOJ, Bellamy obtained a $1.2 million loan for his company Drip Entertainment LLC, and bought more than $104,000 worth of luxury goods, spent nearly $63,000 at the Seminole Hard Rock Hotel and Casino and withdrew more than $302,0000.

“There is more to come. Our work is ongoing. We are not done here yet,” Rabbitt said.