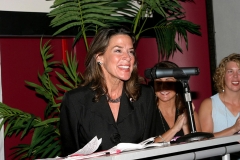 (CNSNews.com) - Former Florida Secretary of State Katherine Harris said Wednesday that the Democrats were given 36 days when former Vice President Al Gore disputed the results of the 2000 election, and they wanted more time in that case, but now they want less time in President Donald Trump’s legal challenges to the 2020 election results.

When asked whether she expects the Justice Department to find any potential instances of fraud besides observers not being allowed to watch the ballot counting process.

“Well, this testimony is critical, and America will watch. We'll let the process work. We let Al Gore take 36 days. It's been nine days,” Harris said in an interview Wednesday with Fox Business’s “Mornings with Maria Bartiromo. (It’s only been eight days since Election Day.)

“They wanted more time in Al Gore's case, and now they want less. We have to let the process work. That's crucial, but we've been gaslit. The media told us that Trump was going to lose, and it invigorated Democrats and depressed Republicans. That kind of psychological manipulation to tell us that 17% in Wisconsin and 12 in Michigan, the soccer moms, plus the fact we had Russia, Russia, Russia, which invigorated the Democrats and depressed the Republicans,” she said.

“So at some point, now we're supposed to listen to those pundits tell us there is no evidence? We'll let the process work. Clearly, there is evidence, and it's Trump's duty to his -- to this country, and it's his right to follow the process, and we have to be patient,” Harris said.

When asked whether the Trump campaign will be able to prove their case, prosecute and be heard in the allotted time before the end of the year, Harris said, “First of all, exactly after the election occurred, we immediately petitioned the Florida Supreme Court so they would take jurisdiction, since we didn't have a uniform standard or -- and ask for a statewide recounted since we didn't have authority to do that. They refused,

“Consequently, Al Gore cherry picked the counties most Democratic to do those votes, so therefore, it went to the U.S. Supreme Court, and they said that it wasn't a uniform standard for voter intent and, therefore, Al Gore lost the case. Had he let me protect his legal rights versus his political viability, there might have been a different outcome,” she said.

“So now, we're facing the same situation but on numerous levels. So the issue is -- well, think back. We had transparency. Remember the guy with the magnifying glass. Everybody watched as Florida counted the votes. They were surrounded by glass, a Republican and Democrat looked at the disputed ballots and made a decision with a canvassing board there,” Harris said.

“You're not seeing that, and that's frightening. That's why the Trump campaign is looking at these lawsuits across the board. We have to have confidence in our voting system,” the former Florida secretary of state said.

“The fact that the Trump campaign is saying that, look, we don't have the observers in place to see what's going on. You're not allowing us to view this. Is that enough to put in enough doubt to say, well, maybe these votes are not on the level?” host Maria Bartiromo asked.

“Well, I don't know if that particular one will be enough right now, and they're in the process of discovery, but we're the gold standard. We have transparency. We go to other countries with observers, and if other countries were doing this, we would find it is a very bad thing. They're in discovery. There are 10,000 dead people voting in one state,” Harris said.

“They have hundreds of thousands of votes where it’s only Joe Biden on the ballot, whereas Trump had all the way down the line. So they're taking a look at that, but this is what I would say. Number one, we have 50 states. Not one of them have certified the election. Not one of them have seated electors,” she said.

“When I was secretary of state, I certified the election. We added up the counties, and that was the answer. So with 50 states never certifying, how can the media be calling the race for Joe Biden? How can they call him president-elect? We don't understand that. There's no office of president-elect. So as the Trump campaign looks at these different issues Then we'll have the opportunity to let the process work, and that's what we need to do,” Harris said.