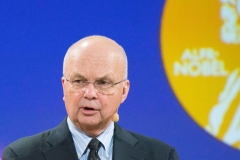 Michael Hayden, former Director of the CIA and NSA, speaks at ‘Nobel Week Dialogue: the Future of Truth’ conference at at Svenska Massan on December 9, 2017, in Gothenburg, Sweden. (Photo by Julia Reinhart/ Getty Images)

During an interview with “CNN Tonight with Don Lemon,” Lemon asked Hayden, who served under former Presidents Bill Clinton, George W. Bush, and Barack Obama and supports Democratic presidential nominee Joe Biden, whether “this kind of right-wing domestic terror threat” is worse now than it’s ever been.

“Oh, absolutely. Even so, I can see that now. Okay, and the FBI talks about that, but the president doesn't want to talk about that at all. It's really, really sad for America, and then, you know, we said something today that's very good, but you know, it's going to happen again and again if the president does another term,” Hayden said.

“And I think what you meant was we can did something, we managed to foil it today, but it’s going to happen again,” Lemon said.

“Exactly,” Hayden replied. “That's what I was saying, exactly right.”

When asked whether Trump is enabling foreign election interference, Hayden said, “Absolutely. That's exactly right. A lot of times in CIA, NSA, FBI, they are doing the right thing, but the president is not talking about it at all.”

“So, the president today attacking two of his most loyal cabinet members, Secretary of State Mike Pompeo, and also Attorney General William Barr, publicly pressuring them to charge Joe Biden and President Obama with crimes. Is this something that can happen?” Lemon asked.

“I don't think so. I think the United States will be okay, but if the president does another term, I don't know what happens to America. I really mean that. You know, this is the most important time since the Civil War. That's, that's the problem,” Hayden said.

"They're in the State Department but Mike Pompeo has been unable to get them out, which is very sad, actually," Trump said.

"I'm not happy about him for that reason," he said. "He's running the State Department -- you get them out."

The president also said the attorney general has “all the information he needs” to indict Obama and Biden for falsely tying the Trump campaign to Russia.

“Unless Bill Barr indicts these people for crimes - the greatest political crime in the history of our country, then we’re gonna get little satisfaction unless I win… because I won’t forget it, but these people should be indicted,” the president said.

“This was the greatest political crime in the history of our country, and that includes Obama, and it includes Biden. These are people that spied on my campaign, and we have everything. Now they say they have much more, okay? I say Bill, we got plenty. You don't need anymore. We got so much,” he said.