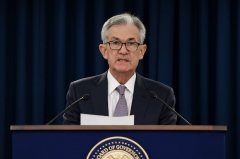 Federal Reserve Board Chairman Jerome Powell speaks at a news confernce after a Federal Open Market Committee meeting on September 18, 2019 in Washington, DC. (Photo by OLIVIER DOULIERY/AFP via Getty Images)

(CNSNews.com) – More than half of the 22 million jobs lost in March and April due to COVID-19 shutdowns have been regained, Federal Reserve Board Chairman Jerome Powell told the Senate Banking, Housing, and Urban Affairs Committee on Tuesday.

“In the labor market, more than half of the 22 million jobs that were lost in March and April have been regained, as many people were able to return to work,” Powell said in his opening statement during a quarterly hearing on the CARES Act.

According to Powell's written remarks, the Federal Reserve Board took “forceful actions to provide relief and stability, to ensure that the recovery will be as strong as possible, and to limit lasting damage to the economy.”

“Economic activity has continued to recover from its depressed second-quarter level. The reopening of the economy led to a rapid rebound in activity, and real gross domestic product, or GDP, rose at an annual rate of 33 percent in the third quarter. In recent months, however, the pace of improvement has moderated,” the chairman said.

“Household spending on goods, especially durable goods, has been strong and has moved above its pre-pandemic level. In contrast, spending on services remains low largely because of ongoing weakness in sectors that typically require people to gather closely, including travel and hospitality. The overall rebound in household spending is due, in part, to federal stimulus payments and expanded unemployment benefits, which provided essential support to many families and individuals,” he added.

“As with overall economic activity, the pace of improvement in the labor market has moderated. Although we welcome this progress, we will not lose sight of the millions of Americans who remain out of work. The economic downturn has not fallen equally on all Americans, and those least able to shoulder the burden have been hardest hit,” Powell said.

According to the chairman, those hardest hit were lower-wage workers in the services sector, women, blacks, and Hispanics.

“In particular, the high level of joblessness has been especially severe for lower-wage workers in the services sector, for women, and for African Americans and Hispanics. The economic dislocation has upended many lives and created great uncertainty about the future. As we have emphasized throughout the pandemic, the outlook for the economy is extraordinarily uncertain and will depend, in large part, on the success of efforts to keep the virus in check,” he said.