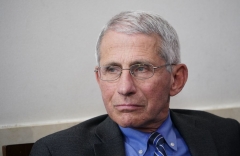 (CNSNews.com) - Dr. Anthony Fauci, director of the National Institute of Allergy and Infectious Disease, on Wednesday touted the results of a worldwide study with the drug Remdesivir as a treatment for the coronavirus.

The study, which started on Feb. 21. showed the drug resulted in a 31 percent improvement in outcome compared to a placebo, Fauci announced during a White House meeting with Louisiana Gov. John Bel Edwards.

“It was a randomized placebo-controlled trial comparing the Gilead drug, Remdesivir, with a placebo. It was highly powered with about 1,090 plus individuals. So it is the first truly high-powered randomized placebo-controlled trial. It was an international trial, involving multiple sites, not only United States, but in various countries throughout the world, including Germany, Denmark, Spain, Greece, the U.K., et cetera,” Fauci said.

“The primary endpoint was the time to recovery, namely, the ability to be discharged. When you have a study like this, we have a data and safety monitoring board which looks at the data. They are independent, so there is no prejudice on the part of the investigators, because they’re doing the trial or the drug is from a certain company.

“The data and safety monitoring board on Monday afternoon contacted me on April 27th - first on Friday, the week before, and then again on April 27th and notified the study team, namely the multiple investigators who are doing the study throughout the world, that the data shows that Remdesivir has a clear-cut, significant positive effect in diminishing the time to recovery.

Fauci called the results “highly significant,” because it shows that a drug can block the virus. The drug shortened the recovery time to 11 days compared to 15 days.

“This is really quite important for a number of reasons, and I will give you the data. It's highly significant. If you look at the time to recovery being shorter in the Remdesivir arm. It was 11 days compared to 15 days. That’s a p-value, for the scientists who are listening, of 0.001. So that is something that, although a 31% improvement doesn't seem like a knockout 100%, it is a very important proof of concept, because what it has proven is that a drug can block this virus,” he said.

“I will give you an example in a moment of why we think, looking forward, this is very optimistic. The mortality rate trended toward being better in the sense of less deaths in the remdesivir group - 8% versus 11% in the placebo group. It has not yet reached statistical significance, but the data needs to be further analyzed,” Fauci said.

“The reason why we are making the announcement now is something that I believe people don't fully appreciate. Whenever you have clear-cut evidence that a drug works, you have an ethical obligation to immediately let the people who are in the placebo group know so that they can have access, and all of the other trials that are taking place now have a new standard of care,” he said.

“So we would have normally waited several days until the data gets further, dot the I and cross the T, but the data are not going to change. Some of the numbers may change a little, but the conclusion will not change,” Fauci said.

Fauci said the results of the study reminded him of the search for an HIV treatment.

“So when I was looking at this data with our team the other night, it was reminiscent of 34 years ago, in 1986, when we were struggling for drugs for HIV, and we had nothing. There was a lot of anecdotal reports about things, that maybe they did work, maybe they did not, and people were taking different kinds of drugs,” he said.

“We did the first randomized placebo-controlled trial with AZT, which turns out to give an effect that was modest, but that was not the end game, because building on that every year after we did better and better. We had better drugs of the same type, and we had drugs against different targets. This drug happens to be blocking an enzyme that the virus uses,” Fauci said.

The Food and Drug Administration is working with Gilead to “figure out mechanisms” to make the drug “easily available to those who need it.”

“With regard to getting to the market. We will obviously have to be approved by the FDA for licensure. The FDA is very well aware that this is something that is very important. I'm sure they're going to be moving very expeditiously, but I can't give you a date,” Fauci told reporters.