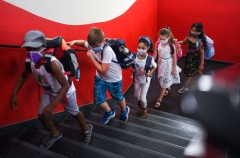 Students with face masks go upstairs to their classrooms at the Petri primary school in Dortmund, western Germany, on August 12, 2020, amid the novel coronavirus COVID-19 pandemic. (Photo by INA FASSBENDER/AFP via Getty Images)

(CNSNews.com) - Dr. Michael Osterholm, director for the Center for Infectious Disease Research and Policy at the University of Minnesota, warned Sunday that as much as governors want to reopen schools there has been “a lot of transmission in schools” in Europe with the new COVID-19 variant.

“The other thing we see right now is every governor wants to open schools, and I understand that. As a grandfather of five children I -- grandchildren, I get it, but the problem is, if you look at Europe right now, the challenge we're seeing is a lot of transmission in schools with this new variant,” Osterholm told NBC’s “Meet the Press.”

“In my home state of Minnesota, we just announced on Friday an outbreak of over 68 individuals in high school community-wide sports. So we're going to have some tough days ahead in the older population and in the younger population with this new variant virus,” he said.

Osterholm also warned that a vaccination rate of 3 million doses a day “over the next six to 14 weeks when this surge is likely to happen, is not going to really take care of the problem at all.”

“Right now, over half of our seniors in this country either have not been vaccinated or have just started their first dose. That means that where 80% of the deaths typically occur, which is in that age group, they are highly vulnerable going into the next four to six weeks,” he said.

“Now, I have to tell you, I'm very grateful that we've vaccinated the 1.4 million people in long-term care facilities, but we still have a lot of high risk people out there that, when this surge comes, basically they're going to be highly vulnerable,” Osterholm added.

“They're going to disregard the public health recommendation. So we have to get real. We have to say, ‘You know what? What does it mean? If I've not seen my grandchildren for the last year and I'm now vaccinated, my spouse is vaccinated, can I see those kids or not?’” he said.

“They're not likely to have a vaccine through next fall or next winter. We have to be practical, and I worry a little bit that we will basically stay with this idea that we've had all along, ‘Do this or else,’ and so I hope that the CDC guidance acknowledges that people are not going to do the extreme for staying masked for 2022,” Osterholm said.