Dr. Ben Carson: Planned Parenthood Founder Was a Eugenicist Who Wanted to Limit the Numbers of Black and Hispanic People 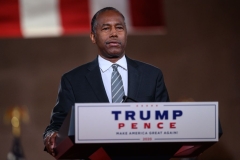 (CNSNews.com) - The nation’s largest abortion provider, Planned Parenthood, was started by Margaret Sanger, a eugenicist who wanted to limit the number of blacks and Hispanics, which is why “the clinics are predominantly found in minority communities,” Dr. Ben Carson told Fox News’ “Sunday Morning Futures.”

“There is so much going on in our society today that people try to relate back to race. Some of it has to do with race, and some of it doesn't, but there are a lot of people who are trying to divide us, divide us on the basis of race, income, age, religion, gender, you name it - divide and conquer,” he said.

“We go back through the history of race in America, not starting at even 1619 but going back into the 1500s and bringing it all the way up to today and looking at those relationships and understanding it is complex but that we as a nation have made enormous progress on race. Just in my lifetime things have changed dramatically. For those who say it isn't any different, that we haven’t made progress, it is very, very disingenuous,” the former HUD secretary said.

“Now, looking at this abortion issue that's going on, a lot of people don't realize that Planned Parenthood was started by Margaret Sanger who was a eugenicist. She wanted to limit the numbers of black people and Hispanic people. That’s why the clinics are predominantly found in minority communities,” Carson said.

“It’s really disgusting, and it goes to our history, and why is history so important? Because history gives you your identity, and your identity gives you your beliefs. If you do not have appropriate beliefs you’re easily swayed. You’ll notice when ISIS goes into a place and conquers it, what do they do? They get rid of the history,” he said.

“We have the same people trying to distort and get rid of our history, and we need to understand those things so that we don’t repeat the bad things. You would have thought we learned all those lessons by World War II, but look what is going on right now, today in Europe. It’s horrible,” Carson said.

“I used to go to conservative at gatherings, and I would be the only black face there. Now there are a lot of black faces there and Hispanic faces, because they’re seeing the things that actually work for them, and that’s really the key - education,” he said.

Carson said that “some people want to blame everything on systemic racism, and they say for instance, the wealth gap is because of systemic racism, but interestingly enough, there are black people who do very well in this country - Nigerians, Ghanaians, others, and they have black skins, but what you'll notice in those families is that the bachelor degree is the baseline.”

“That’s where they start and a lot of emphasis on family and family structure, and if you look at the traditional black American families that emphasize education and family structure, you’ll also see very little in the way of wealth gap. So maybe we’re looking at the wrong things, and I think a lot of minorities are starting to recognize that. They’re opening their eyes. They’re not just listening to so-called leaders and slavishly following what they tell them,” he said.

Blacks and Hispanics saw “a lot of things done in the previous administration, which were things that were done for everybody with the belief that a rising tide floats all boats, and that’s so important,” he said.

“I just want to say on this whole abortion issue. I mentioned how Margaret was a eugenicist. I also find it very interesting that if someone kills a pregnant woman, they get charged with two murders, but if you just kill the baby, it's okay. I don't understand that,” Carson said.

“That does not make any sense, and there’s a lot of things that don't make sense, because we’re politicizing them and not using the incredible brains that God gave us to figure out things, to work together to come up with solutions that work for a diverse society,” he said.