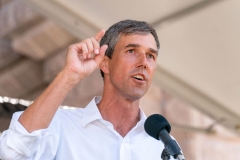 (CNSNews.com) – Democratic Texas gubernatorial candidate Beto O’Rourke interrupted a press conference by Texas Gov. Greg Abbott on the Ulvade school shooting to chastise the governor and other Republican leaders, who were gathered for “doing nothing” about guns.

O’Rourke interrupted just as the governor was handing the mic to Lt. Gov. Dan Patrick when O’Rourke stood up and was promptly shouted down.

“Governor Abbott, I have to say something,” O’Rourke said, then he listed a number of shooting massacres.

“The next shooting is right now, and you are doing nothing. This is totally predictable when you--” he said.

“Sir, you are out of line. Please leave this auditorium,” Don McLaughlin, the mayor of Uvalde, Texas, shouted. “I can't believe you are a sick son of a bitch that would to come to a deal like this to make a political issue.”

As O’Rourke was escorted out of the room, he turned around and said, “It’s on you until you---“

“It’s on assholes like you. Why don’t you get out of here,” McLaughlin said.

“We need to focus not on ourselves and our agendas, we need to focus on the healing and hope that we can provide to those who have suffered unconscionable damage to their lives and loss of life. We need all Texans to in this one moment in time put aside personal agendas, think of somebody other than ourselves, think about the people who were hurt and help those who have been hurt,” he said.