DC Mayor: Migrants Are Being 'Tricked' into Getting on Buses 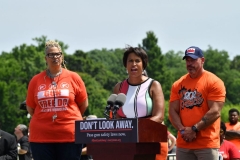 (CNSNews.com) - D.C. Mayor Muriel Bowser told CBS's "Face the Nation" on Sunday that migrants are "being tricked" into getting onto buses "going to final destinations that are not Washington, D.C."

CBS host Margaret Brennan said that homeless shelters in D.C. are “filling up and groups are getting overwhelmed by these buses that the governors of Texas and Arizona are sending here full of migrants.”

“Well, this is a very significant issue. We have, for sure, called on the federal government to work across state lines to prevent people from really being tricked into getting on buses. We think they're largely asylum seekers who are going to final destinations that are not Washington, D.C.,” Bowser said.

“I worked with the White House to make sure that FEMA provided a grant to a local organization that is providing services to folks, but I fear that they're being tricked into nationwide bus trips when their final destinations are places all over the United States of America,” the mayor said.

Bowser said that “local taxpayers are not picking up the tab and should not pick up the tab, and we really need a coordinated federal response.

“We know that it's done for refugees who - who come to - to the states from all points of the world and the same has to be done in this situation,” the mayor said.

On the broader issue of homelessness, the city has been “working on creating affordable housing and producing and preserving more, and we are among the jurisdictions, I would say, that lead the nation in being a local partner in production,” Bowser said.

“So, just in the last seven years we've invested more than $1.4 billion in doing exactly that. We're equally invested in making homelessness rare, brief and non-recurring in our city, and we have a plan to get there," she said.

“We've seen our rates of family homelessness, for example, decrease by 78 percent. Chronic homelessness also. We're attacking and driving those numbers down for most categories. So, what we see is, in a city like ours, where people want to live and want to work, that we always have to be producing more housing," the mayor said.

When asked whether higher interest rates are discouraging builders from producing what the city needs and whether the city needs the federal government to step in and provide some sort of support, Bowser said, “Well, we certainly are going to be able to do less with the very historic investments that we've made.

“So, we're concerned about that, but what I know, that we're doing everything locally that we can. We have a tool called the Housing Production Trust Fund. This year alone we'll invest $450 million in new units. We've set a goal of building 36,000 new units,” the mayor said.

“So, we're always looking for the federal government to be a partner, and I have to say that in coming out of this pandemic and everything that the federal government was able to do to help cities like ours keep people housed with the American Rescue Plan dollars, with making sure that we're preventing evictions and keep people from getting evicted has been very helpful,” she said.