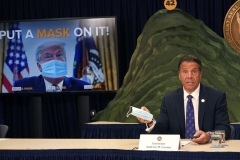 New York Governor Andrew Cuomo speaks at a news conference on July 6 ,2020 in New York City where he announced that President Donald Trump is enabling the coronavirus pandemic by not wearing a mask and downplaying the problem. (Photo by TIMOTHY A. CLARY/AFP via Getty Images)

(CNSNews.com) – New York Gov. Andrew Cuomo on Sunday threatened to sue the Trump administration if it does not provide “an equitable” process for disseminating the COVID-19 vaccine taking into account that most “black and brown communities” have a shortage of health care institutions and pharmacies at CVS and Walgreens where the vaccine will be distributed.

Speaking at the Riverside Church in Albany, N.Y., Cuomo said that COVID uncovered the lack of trust that people have in the federal government.

“We have a vaccine on the way – truly great news, but polls say 50 percent of the American people say they would not take the vaccine if it were available today, because they don’t trust the way this federal government has politicized the process. So New York and other states – 7 in total – will simultaneously review the vaccine approval with independent medical experts so people know it’s safe,” he said.

Cuomo also raised the possibility that illegal aliens won’t get vaccinated out of fear that they will be identified as illegal and deported.

“Undocumented people distrust the federal government and believe they may use the vaccine process to identify them for deportation. New York must make sure that doesn’t happen. We must restore trust in government, because a vaccine will only work if people trust the government enough to take it, and that has to be our mission here in the state of New York,” he said.

“The Trump administration is designing the distribution plan and their plan basically has private healthcare companies administer the vaccine: hospitals, big drugstores, doctor's offices, et cetera. It sounds fine, right? But hold on. We know that our Black and brown and poor communities have fewer health care institutions,” Cuomo said.

“Their communities are all too often healthcare deserts. That's why we have more underlying conditions, and that's why the COVID death toll is so high for black and brown communities. We're not going to make the same mistake again. Period. Majority black zip codes are 67 percent more likely to face a shortage of primary care doctors,” he said.

“The president talks about CVS and Walgreens and national chains. Sure, but they are mainly located in rich communities, not in poor communities. My friends, we can't compound the racial injustice that COVID already created. Let me be clear, the black and brown communities that were first on the list of who died cannot be last on the list of who receives the vaccine, period,” the governor added.

According to the Department of Health and Human Services website, “HHS and DoD announced partnerships with large chain pharmacies and networks that represent independent pharmacies and regional chains. Through the partnership with pharmacy chains, this program covers approximately 60 percent of pharmacies throughout the 50 states, the District of Columbia, Puerto Rico, and the U.S. Virgin Islands. Through the partnerships with network administrators, independent pharmacies and regional chains will also be part of the federal pharmacy program, further increasing access to vaccine across the country—particularly in traditionally underserved areas.”

The governor said that special efforts need to be made to ensure that underserved black and brown communities receive the vaccine, because “the private market alone will not do it.”

“We need to enlist community groups to distribute the vaccine in their community. We need faith-based groups that the community trusts to distribute the vaccine. We need medical teams and outreach teams going into public housing projects and low-income communities. New York State will mobilize an army to vaccinate all New Yorkers fairly, equitably. No state will do it better,” he said.

Cuomo pledged to do a better job than any state in the nation at vaccinating New Yorkers in a fair and equitable manner, but he called on the federal government to provide more funding.

“That is our promise, but we need the federal resources to do it. New York State already has a $15 billion deficit. The federal government has been starving state and local governments, and they know it. Their own federal government CDC says it will cost $6.6 billion to do a fair distribution program. They've only provided $140 million,” he said.

“All this federal government does is point fingers. It's about time they look in the mirror. Don't tell us it's a state's responsibility without giving the state the resources to do the job. You fool no one. We call that in New York passing the buck without passing the bucks. You're not going to get away with it anymore,” Cuomo said.

“President Trump must learn the lesson: Stop the abuse. Stop the division. Stop the anger. Stop the hatred. Stop the narcissism and spend your last months actually trying to help people and repairing the damage you have done. Who gets the vaccine and who doesn't get the vaccine is not just a question of morality and principle, it's a legal question,” he said.

“I've tried to work with the Trump administration and argue morality and principle for 4 years. You're better off trying to argue with a rock, but it's not just about morality. I hope that the Trump administration opens their eyes, but I'm dubious. I'm not going to allow New Yorkers to be bullied or to be abused. I'm not going to allow the injustice to continue. Let's look at the law,” the governor said.

Cuomo cited the 1982 Supreme Court ruling on Plyler v. Doe, which said that states cannot deny funding for education to “undocumented” immigrant children in the U.S.

“There can be no more fundamental right in this moment than access to the vaccine. Any plan that intentionally burdens communities of color to hinder access to the vaccine deprives those communities of equal protection under the law and equal protection is enshrined in the Constitution of these United States. The Supreme Court held in Plyler v. Doe, 1982, denial of certain basic rights to and, I quote, ‘An isolated group poses an affront to one of the goals of the Equal Protection Clause,’” Cuomo said.

“And it's not just right for the Black and brown community. It's smart for everyone, because the virus shows us the simple truth. Unless everyone is protected, no one is protected,” he said.

As CNSNews.com previously reported, President Donald Trump said on Friday that while the vaccine will be available to everyone in April, New York probably won’t receive the vaccine right away because the governor “doesn't trust where the vaccine is coming from.”

Trump said that Cuomo “doesn't trust the fact that it is this White House, this administration, so we won't be delivering it to New York until we have authorization to do so, and that pains me to say that.”

“Governor Cuomo will have to let us know when he is ready for it. Otherwise, we can't be delivering it to a state that won’t be giving it to its people immediately, and I know many -- I know the people of New York very well. I know they want it, so the governor will let us know when he’s ready,” the president said.

In an interview with ABC’s “Good Morning America” last Monday, Cuomo said it was “good news” that Pfizer had a vaccine that was 90 percent effective, and “we’ll have a vaccine shortly.”

“The bad news is that it's about two months before Joe Biden takes over, and that means this administration is going to be implementing a vaccine plan. The vaccine plan is very important, and it's probably the most ambitious undertaking since COVID began,” the governor said.

“The Trump administration is rolling out the vaccination plan, and I believe it's flawed. I believe it learns nothing from the past. They're basically going to have the private providers do it, and that's going to leave out all sorts of communities that were left out the first time when COVID ravaged them,” he said.

“Why do we have such a disparity in the infection rate and mortality rate in COVID? Because some communities don't have the same access to health care. I'm sure the Biden administration is going to address that,” the governor said.

“I think his first step, saying let's focus on the science, let's depoliticize testing data, listen to the scientists is the exact opposite of trump, but you have two months, and we can't let this vaccination plan go forward the way that trump and his administration is designing it, because Biden can't undo it two months later,” he said.

"We'll be in the midst of it, and I'm going -- I've been talking to governors across the nation about that. How can we shape the Trump administration vaccine plan to fix it or stop it before it does damage?” Cuomo added.