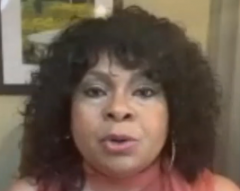 Speaking on “CNN Newsroom with Ana Cabrera,” Ryan was reacting to the violence in Portland and Mayor Ted Wheeler’s accusation that Trump is responsible for the violence in his city because he has created hate and division.

She said people have asked her whether the International Criminal Court, which investigates crimes against humanity, should intervene.

“And there are those who are calling for help from this president in the stoking of a race war. There is a race war in America right now because of this president. People are calling me, asking if there indeed is a way to get the International Crimes Court to come in to deal with this,” Ryan said.

“You know, I've talked to some people who are in intelligence, and they're saying he's done heinous things, but they have to see. We don't know for sure. People are now afraid of this president, because he has stoked the racial flames. Let’s call a thing a thing. He has now begun a race war in America in 2020,” she said.

When asked whether he agrees with Ryan that a race war is playing out, former Philadelphia Police Commissioner Charles Ramsey said he doesn’t want to get into the politics and that he’s “here for the policing part of it.”

I think everybody needs to calm things down a bit. This is dangerous, and I don’t think people realize just how dangerous it really is. Listen, wherever you stand on a political spectrum, left, right, wherever, it doesn't matter. You have a right to peacefully protest.

When you add heated rhetoric and you add guns into the mix, absolutely nothing good can come from that, and this is going to get worse before it gets better unless people start toning it down a little bit and dealing with the issues we have in front of us. There's a lot of issues affecting us in society now. We're not going to fix them by throwing bombs at each other. That's just not going to happen.

As far as the police go, I mean they're right in the middle of it right now, and I really feel for that chief. I was listening to him as he was talking. I've been there, not quite in the same position he’s in now, but these things are very, very difficult to handle.

It's almost impossible to keep these groups apart from one another. The more we talk about these things in extreme terms, the more likely it is we're gonna have more violence take place on the streets, and it's not going to just be limited to Portland.

When asked whether he thinks it was ever as dangerous as it is now, David Gergen, who served as presidential adviser to Nixon, Ford, Reagan, and Clinton, said, “There were times during the Vietnam War I did.”

Gergen said he doesn’t think the nation has a race war right now, “but unless we’re careful, we’re headed in that direction.” He said Mayor Wheeler “must be a fine man,” cares about the city and “wants to get a good resolution,” but he didn’t help himself by accusing President Donald Trump of being racist and sexist.

The first thing was as you said you opened the show by saying there's been an escalation in the rhetoric. Yes, and he came in and said we need to de-escalate, and then immediately escalated, went after the president in very harsh terms, very personal, very ad hominem You know, he has a good case, but if you're going to try and find peace and healing, you need to be able to sit down with each other, too.

It's impossible now for a lot of Republicans to work with someone like this towards trying to find the healing, but the second thing which startled me is -- I came away feeling, he doesn't have the resources, and after some of these 90 days, he still doesn't have the resources. There's something wrong with that picture. How do we know there won't be another shooting tonight?

They don't have enough police there. I do think it reinforces for better or worse, the mayor working with the governor or the National Guard or some larger presence, to bring us in. You cannot negotiate for peace when you're shooting at each other or calling each other names.