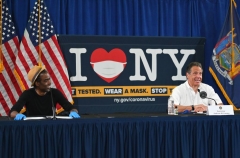 Actor/comedian Chris Rock speaks with NY Governor Andrew Cuomo(R) and actress Rosie Perez during a press briefing on COVID-19 at Madison Boys and Girls Club in the Brooklyn borough of New York City on May 28, 2020. (Photo by ANGELA WEISS/AFP via Getty Images)

“Before we get started, the elephant in the room. President Trump’s in the hospital from COVID, and I want to say, my heart goes out to COVID,” he said.

Rock also said that Democratic presidential nominee Joe Biden “should be the last president ever” and the American people should renegotiate its relationship with the government.

“I think we need to renegotiate our relationship to the government that doesn’t work.  I think Joe Biden should be the last president ever. We need a whole new system. Do we even need a president, president? Or just figure out a new way to do the job. What job do you have for four years no matter what? Show me one job, like if you hired a cook and he was making people vomit every day, do you sit there and go, ‘well, he’s got a four-year deal. We just gotta vomit for four more years,’” he said.

Rock said that there are more rules to game shows than there is for running for president and that Trump ran for president because it was easier than the game show he was on, referring to “The Apprentice.”

“I mean there should be some rules to being the president. You realize there’s more rules to a game show than running for president. Like Donald Trump left a game show to run for president, because it was easier. That’s right. There’s rules to Jeopardy. You can’t just jump on Jeopardy. You can’t throw your son on Jeopardy or your son-in-law. Steve Harvey can’t put his family on Family Feud. It’s like real scrutiny, man, and then the Democrats even want to win, do they even want to win?” he said.

“It’s like Trump, he runs against-- the Democrats just keep putting up 75-year-old people to run against Trump. Now, hey one thing we can say about Trump, he got the most energy than any 75-year-old person on the face of the earth. Even Mick Jagger’s like, ‘Slow down, Donald.’ Trump is like, he’s like a dominant female boxer. He’s like Ronda Rousey,” the comedian said.

Rock called for term limits on members of Congress, comparing them to dukes and duchesses.

“We gotta figure out our whole relationship. We gotta renegotiate our relationship to the government. The Senate and the Congress doesn’t work. No. It doesn’t freaking work, man. And why doesn’t it work? Because they need freaking term limits, okay? We’ve agreed in the United States that we cannot have kings, yet we have dukes and duchesses running the Senate and the Congress making decisions for poor people. Rich people making decisions for poor people,” he said.