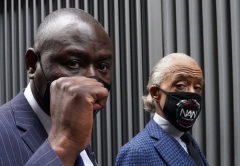 Attorney Benjamin Crump (L) holds up his fist as he walks with Reverend Al Sharpton after holding a press conference during the National Action Network(NAN) Virtual Convention 2021 in New York on April 14, 2021. (Photo by TIMOTHY A. CLARY/AFP via Getty Images)

“He's encouraging rioting and looting, and any person knows that. When you watch his words, he’s signaling to you that it’s okay right now. If you’re a black American, and you feel aggrieved by another black person dying, you can go out. You can riot and you can loot, and we want this to keep happening,” Owens told Fox News’s “Ingraham Angle” on Thursday.

“And look, Easy analysis here, Laura. You know what this is. I know what this is. This is another race hustler. It’s become a business. Race has become a business. Keeping racial issues alive as a business in America. It's Al Sharpton yesterday, Jesse Jackson tomorrow, Ben Crump today. This is the stuff that we see day in and day out, but a deeper analysis of this, a better question to ask ourselves as America right now is what is going on in this country?” she said.

“I'm past the part of looking at one person like Ben Crump and wanting to say, what are you doing, Ben Crump? The question is why do we have people right now that are trying to fund the destruction of America? We didn’t grow up in an America like this,” Owens said.

Owens said that you see on the streets of Minnesota is not protesting. It’s rioting, and she questioned why some corporations are signaling that they are okay with it.

Let's be clear, this is not protesting. We know what’s going to take place. It doesn’t matter what the outcome of a Derek Chauvin trial is. What’s going to happen is Minnesota is going to be rioted. It's going to be looted and you have a bunch of people who are going to say this is just what Minnesota deserves, we need to make sure George Floyd got justice, because I get to run into a Target and still a couple of flat screen TVs.

What we’re really seeing now, it's not about racial justice it's about criminality. There’s a bunch of criminals that are waiting to make sure the trial has concluded so that they can rob and they can loot and they can riot against corporations. The strange part is the fact that corporations are signaling they are okay with this.

The corporations don't see this as problematic, so what is it that the corporations are getting in return, that they are okay with people going into their stores and stealing money? In my opinion, it’s power. Who is behind the power in this country that they want to see so much division? We know this country cannot stand divided.

This country has never been this divided at least not in my lifetime, never seen the country look like this. I've never seen people that are so hateful and so evil and that actually want to see America destroyed from the inside out. It is so alarming, and it seems like there is no end to the madness.

It doesn't matter if you're a criminal, you can become a hero tomorrow if while you are committing a crime you die at the hands of a police officer. It's wrong, and it's backwards, and to me, I honestly feel like I don't recognize the country that I live in anymore.