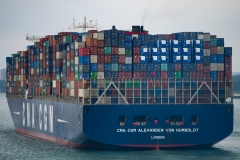 The plan is to assess a surcharge for every shipping container that sits at the port after a period of time, in order to move things along and reduce backlogs in the supply chain.

The Port of Los Angeles announced the plan in a press release on Monday:

Under the new policy, the ports will charge ocean carriers for each container that falls into one of two categories. In the case of containers scheduled to move by truck, ocean carriers will be charged for every container dwelling nine days or more.

“We must expedite the movement of cargo through the ports to work down the number of ships at anchor,” Port of Los Angeles Executive Director Gene Seroka said in a statement. “Approximately 40% of the containers on our terminals today fall into the two categories. If we can clear this idling cargo, we’ll have much more space on our terminals to accept empties, handle exports, and improve fluidity for the wide range of cargo owners who utilize our ports.”

White House Press Secretary Jen Psaki announced the plan on Tuesday when asked about whether the president will tap the Strategic Oil Reserve if gas prices reach a certain price.

“On the economy, I don’t know if you saw The New York Times this morning about the cost of Thanksgiving could be some of the highest that we’ve seen in a long time. Obviously, you heard the president talk about gas prices at that CNN town hall. Would there be a price that gas would have to get that the president would say, okay, now’s the time to tap the Strategic Petroleum Reserve?” a reporter asked.

PSAKI: The president reserves a range of options, and he is certainly quite mindful of the impact of any increased cost on the American public. There are a range of factors here, which we could delve into, but I will say that on gas prices, one of the issues that Jake referenced - and obviously, as we have more details on what this may look like, we’ll share it with all of you, is being able to … raise our concern and the president’s concern about supply issues as it relates to oil, and that’s something that certainly he can do on the international stage, and there’s a power of the president of the United States engaging on that front.

That issue has been raised at Jake’s level, at a range of levels throughout government, but certainly the supply and OPEC and putting additional pressure on OPEC is something that certainly our national security team will continue to do. I will also note that as it relates to gas prices, we remain concerned about trends we have seen where even as supply has increased at times over the last several months, we’ve still seen heightened prices. …

We’ve asked the FEC to look into that. They’ve said they were doing that, but as it relates to cost, there’s a number of steps, so let me just give you just a brief update on steps we’re taking at the ports that is … kind of new information. One I would note that one of the -- and this is not about gas prices, but just about the movement of goods, which is certainly something that is impacting I think a lot of people across the country.

One I would note, and I thought this was an interesting fact. Both ports -- the port of Los Angeles and Long Beach, which we’ve talked about a lot because of the huge amount of volume that goes through them -- are moving an unprecedented amount of cargo this year, so one of the challenges - we’ve talked about those … but I’m going to put some numbers on it.

Both ports are moving 19 percent more containers than at the same point in 2018, which was the previous record, and the ports remain on target to outpace the previous record of 17.5 million containers processed in 2018. That’s because of a range of factors. People are buying more things online.

People are in a better - not everyone - but a lot of people data-wise across the American public are in a better financial situation than a year ago, so they’re purchasing more goods, and what we’re seeing right now are terminals are filled with containers that have been sitting around for days without getting picked up, holding goods in these containers, and that is obviously a challenge.

So yesterday I just wanted to note that the ports announced they will address this problem and no longer let carriers use the ports as warehouse space, and this will hopefully help move things a little bit more quickly, and starting on November 1st for the first time, the ports will charge carriers $100 per container scheduled to be moved by truck that has sat on that port for nine days and more and $100 per container scheduled to be moved by rail that has dwelled three days or more.