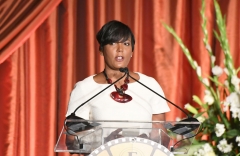 Bottoms told CNN’s Chris Cuomo that despite a reported sick out, the department has enough officers to cover shifts through the night.

“Well, you know, Chris, across the country morale is down with police departments, and I think ours is down tenfold. This has been a very tough few weeks in Atlanta. With the tragedy of Mr. [Rayshard] Brooks and then on top of that the excessive force charges that were brought against the officers involved with the college students, there’s a lot happening in our city, and our police officers are receiving the brunt of it, quite frankly,” she said.

The mayor said that her administration has had “a great working relationship with our officers.”

“In fact, our officers were given an historic pay raise by our administration. It was so our officers wouldn't have to work three jobs and be fatigued so they could afford to live in the city of Atlanta and so that they would not be resentful about policing our streets, so that we could have the best to choose from on our force,” Bottoms said.

Rolfe faces the most charges – 11 counts, including felony murder, aggravated assault with a deadly weapon, criminal damage to property, and violation of oath.

CNN’s Chris Cuomo asked the mayor whether she believes the charges against the officers “warrant this kind of potential revolt by police officers.”

“No, I don't. I don't. Everything in this country has changed. I think what is surprising to many is the swiftness of the charges in the same way it was surprising with the college students two weeks ago. Simply because we don't normally get charges this quickly from our district attorney in cases like this, but that being said everything in this country has changed,” Bottoms said.

“In light of what saw with George Floyd and Ahmaud Arbery and Breonna Taylor and now Rayshard Brooks, we should expect that things will be different. In bringing charges and even taking actions to fire police officers in a much more swift fashion, that is likely to be our new normal,” she said.

The mayor said there are “other use of force cases” on the DA’s desk that deserve attention.

“Well, we have an independently elected district attorney in our city. What I would say, though, as it relates to the swiftness of these charges, I just want to see the same swiftness as it relates to the other use of force cases that are sitting on the district attorney's desk. We have at least two other cases involving officer involved shootings, and we have not gotten outcomes on those cases, so I just think we want to see it across the board,” Bottoms said.

She said that before the charges were announced, she didn’t know that about the allegations against the other officer or that another car was hit by bullets fired by the officer.

“And, you know, I'll defer to the district attorney on what the appropriate charges were. There was information that even I learned today in watching his press conference in terms of the other officer and the allegations made against the other officer and even that there was another vehicle hit during all of this. So I'm getting a lot of information the same time as the public is getting it, and we'll review it and continue to make our decisions accordingly,” the mayor said.

“Three quick things. One, what you were just saying about wanting action in the other cases? Is some politics being played here in terms of this case being dealt with swiftly and with a heavy hand because it is in the news? Do you believe the prosecutors? Or, you know, they're politicians, too. Are they playing to the politics here?” Cuomo asked.

“I know our district attorney is involved in a run-off so I won't speak to that. I think there is a bit of a difference in the other cases in that there is not body cam video available, and I believe I heard him say today that is the reason he's not taken action in those other cases, but the point is that we still have some other families awaiting some finality and outcomes on those cases,” Bottoms said.

The Georgia Bureau of Investigation (GBI) was surprised by the swiftness with which charges were brought against the officers, and reports say they felt like they were left out of the loop, Cuomo said.

“Well, that is between the district attorney and the GBI, Chris. I have more to deal with than I can say grace over right now, so I'll leave that up to them to figure that part out,” the mayor said.

Bottoms said everything about the case disturbs her. She complained that Brooks “was not humanized.”

“Chris, everything about this case is disturbing to me, from watching the more than 30 minute interaction between Mr. Brooks and the officers,” the mayor said.

“To see it in this way. I don't even have the words to describe how disturbing it was because what struck me is that he was not humanized in that moment. There were so many other things that could have happened. This could have turned out so differently,” she said.

“And then I watched Anderson Cooper just before coming on with you, and to see Mr. Brooks tell his story about being incarcerated. My dad went to prison when I was 8. I counted each and every day waiting for him to come home,” Bottoms said.

“And to think that he was simply trying to get to his daughter's 8th birthday celebration because he said that, when he spoke of what he had planned and why he just wanted to walk to his sister's house,” the mayor said.

It is just tragic and, you know, I go between anger and frustration and just sheer sadness, because for everything that we're doing in Atlanta to try and get it right, when something like this happens, shows that there is a deeper systemic problem that we have, and even if we get it right tomorrow, it still doesn't bring Mr. Brooks back home to his family,” she added.

Bottoms said she doesn’t have a count yet on how many officers have called out sick, “because we were in the midst of a shift change, but what I do know is that we do have enough officers to cover us through the night.”

She said Atlanta “won't be any less safe because of the number of officers who called out, but it is just my hope again that our officers will remember the commitment that they made when they held up their hand and they were sworn in as police officers in the city of Atlanta.”

The Atlanta Police Department corrected reports that multiple officers in each zone walked off the job, saying the department had received a higher than usual number of call outs with the incoming shift,” but they have “enough resources … to respond to incidents.”

“Earlier suggestions that multiple officers from each zone had walked off the job were inaccurate. The department is experiencing a higher than usual number of call outs with the incoming shift. We have enough resources to maintain operations & remain able to respond to incidents,” the Atlanta PD tweeted on Wednesday.

“The Atlanta Police Department is able to respond effectively to 911 calls. Please don’t hesitate to call if you have an emergency,” they tweeted.

Bottoms said she hadn’t spoken directly to the police union on Wednesday, “but I'm sure that we will be in contact with them.”

“I've been in contact with our interim police chief, and, listen, there is no playbook for what we are dealing with right now across the country. So what I do know is that we have a lot of men and women who work for our police department who care about this city, and they work each and every day with integrity and with honest interactions with our communities,” she said.

“Those are the people who I expect will show up for work, and if we have officers who don't want bad officers weeded out of the force, then that is another conversation we need to have with all of our officers, because when we're talking about fixing what is wrong with our police department and what's happening in our communities, it is just as much for the protection of our communities as it is for our police officers,” the mayor said.

As to whether surrounding jurisdictions are sending officers to help cover the gap, Bottoms said, “Well, right now we are covered with our force, because we have some officers who are staying on a bit longer to cover a longer shift to make up the difference but we've already notified many of our other partners just in case we need to call others in, but we're fine. I think our true test will be likely tomorrow, but I don't have any concerns about where we are this evening.”

“I take it one day at a time, and in the morning we'll start over, and we'll see what we have before us, but again, this I an independently elected district attorney. I didn't talk with the district attorney before he went forward with these charges. These are charges that he decided to bring against our officers and, you know, we will see how justice will be served for Mr. Brooks,” she said.

“And we'll see what the outcome is with these officers, but meanwhile, we have communities that we still need to protect, and it is my hope in the same way that I kept my word to our officers when it came to that historic pay raise they'll keep their word to the people of Atlanta,” the mayor concluded.