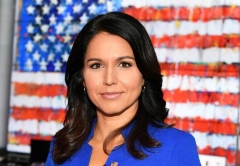 “McAuliffe’s loss is a victory for all Americans. Why? Because it was a resounding rejection of efforts to divide us by race, the stripping of parental rights, and arrogant, deaf leaders. This benefits us all,” Gabbard tweeted on Nov. 3.

Monday on Tucker Carlson Tonight, Gabbard pointed out how more Democrats are trying to divide our country, but Virginian voters fought back.

McAuliffe’s loss is a victory for all Americans. Why? Because it was a resounding rejection of efforts to divide us by race, the stripping of parental rights, and arrogant, deaf leaders. This benefits us all.

“Terry McAuliffe represented that fomenting of divisiveness, this racialization -- and Virginia voters rejected that,” Gabbard said. “Regardless of political party, this is what I hope we see more of in this country.”

A major focus of the Virginia election was the controversy surrounding Critical Race Theory (CRT) in schools, and whether parents had a right to decide what their children were being taught in the classroom.

“CRT creates a false narrative of division that pits Americans against each other,” Senator Marsha Blackburn (R-Tenn.) says on her website. “These lessons are disguised as ‘anti-racist’ but in reality are a direct push for racial division.”

CRT teaches that America, in all her institutions, is inherently racist and that white people are the enemy of freedom and progress. CRT is a racist, anti-white, anti-Europeans, ideology.

With all the problems and challenges that face us, it’s not surprising that some feel hopeless. But let me say: as long as God (whose very essence is love) exists, there is hope. And since God, being eternal, will always exist, there will always be hope. pic.twitter.com/jm9TsNTeaG

The reality of the CRT curriculum coupled with McAuliffe stating that he did not believe “parents should be telling schools what they should teach,” led to the triumph of Youngkin’s campaign.

This ceased to be a campaign, and it started to be a movement led by parents," Youngkin said Wednesday on Tucker Carlson Tonight.  "Education really did become the top issue in this election."

Virginia parents agreed with Youngkin’s analysis, explaining they were encouraged by the unity he created amongst Virginians.

“It has been great to see how the importance of our children's education and the parents matter movement has brought so many people together," Brandon Michon, a father of three, told Fox News. "This is Virginia's opportunity to raise the bar, and we will be doing it with Glenn Youngkin as governor."