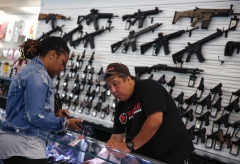 (CNS News) -- The number of concealed handgun permits has increased 48% since 2016, amounting to more than 21.52 million Americans with such permits today, according to a new report by the Crime Prevention Research Center.

The Center’s verifiable numbers, however, don’t show the whole picture. “Twenty-one states have adopted constitutional carry for their entire state, meaning that a permit is no longer required,” according to researchers John R. Lott and Rujun Wang.  “Because of these constitutional carry states, the nationwide growth in permits does not paint a full picture of the overall increase in concealed carry.”

“Many residents still choose to obtain permits so that they can carry in other states that have reciprocity agreements, but while permits are soaring in the non-Constitutional Carry states, they fell in the Constitutional Carry ones, even though more people are clearly carrying in those states,” the researchers reported.

Between 2020 and 2021, the number of concealed-carry permit holders increased by 2 million, setting a new record. The Center attributed part of the increase to states reopening applications that were suspended because of COVID-19.

The Center’s data also revealed a significant increase in the number of minorities, specifically women, blacks, and Asians, who received permits.

“In Texas, black females saw a 6.3 times greater percentage increase in permits than white males from 2002 to 2020,” reported the Center. “Oklahoma data from 2002 to 2020 indicated that the increase of licenses approved for Asians and American Indians was more than twice the rate for whites. North Carolina had black permits increase twice as fast as whites from 1996 till 2016.”

“The surge in concealed handgun permits corresponds closely with opinion polls on guns,” said the Center. “In 2000, Gallup found that only 35 percent of Americans thought that owning a gun made their home safer. By 2014, that number had soared to 63 percent.”

“It's not just that Americans think that having a gun makes them safer as individuals,” reported the Center. “They also feel better knowing that their neighbors are armed. A Rasmussen poll from this past June found that a 68-to-22 percent margin of Americans ‘feel safer in a neighborhood where guns are allowed.’”