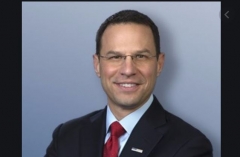 (CNS News) – Although ballots have not even been counted, and Election Day is tomorrow, Pennsylvania Attorney General Josh Shapiro, a left-wing Democrat, tweeted on Saturday that “Trump is going to lose.”

Shapiro also said that Trump should not consider a court fight over the votes because, “for the record, he’s 0-6 against us in court.”

“If all the votes are added up in PA, Trump is going to lose,” tweeted Shapiro.  “That’s why he’s working overtime to subtract as many votes as possible from this process.”

If all the votes are added up in PA, Trump is going to lose. That’s why he’s working overtime to subtract as many votes as possible from this process.

For the record, he’s 0-6 against us in court. We’ve protected voting rights. Now, ignore the noise—vote!https://t.co/mN8t6TDud7

“For the record, he’s 0-6 against us in court,” Shapiro added.  “We’ve protected voting rights. Now, ignore the noise—vote!”

Twitter unveiled new rules in the lead up to the presidential election, including restrictions on posting premature election results:

“Premature claims of victory, made before officials or credible news sources have called the election, also will get labeled, with users directed to Twitter’s election page, the company said," reported The Washington Post. "Any tweet related to the presidential or congressional elections that the company’s moderators say encourages interference in the voting process — especially if the tweet encourages violence — will be removed."

This election cycle is the first time Pennsylvania has allowed Vote-by-Mail; officials will not start counting any ballots until the morning of Election Day, Nov. 3.

Attached to his tweet, the Pennsylvania attorney general attached an article with the headline, “Trump baselessly sows doubt about election at Pennsylvania rallies while coronavirus surges.”

The piece criticizes the president for asking his supporters to “scrutinize polling places” and for doubting the legitimacy of mail-in ballots arriving after Election Day.

Commenting on Shapiro's post, libertarian Dave Rubin tweeted, "Can someone explain to me how the attorney general of PA knows the results of the election the day before the election itself?"