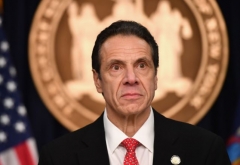 At a press conference on Monday, Cuomo singled out the Orthodox Jewish community for violating the reinstated COVID-19 restrictions, which mainly target Jewish neighborhoods or “hotspots.”

“I have to say to the Orthodox community tomorrow, 'If you're not willing to live with these rules, then I'm going to close the synagogues,'” said Cuomo.

Gov. Andrew Cuomo: "I have to say to the Orthodox community tomorrow, 'If you're not willing to live with these rules, then I'm going to close the synagogues.'" pic.twitter.com/QWOPvZMbFI

“It's a difficult conversation,” he said.  “You’re right on the line of government intrusion on religion, so it's hard. I didn’t want to close down 1,000 bars, put people out of work. But I know in NYC’s case 26 enforcement actions, that with this rampant ongoing violation, you think 26 enforcement actions was going to stop it?”

Cuomo’s press conference comes after his reinstatement of COVID restrictions on 30 zip codes that have seen spikes in positive cases. Many of these neighborhoods have significant populations of Orthodox Jews. The new regulations also coincided with the High Holidays, where Jewish residents worship together in massive crowds.

The protests were a defiant act against the governor’s orders and a way of celebrating the holiday of Sukkot, which lasts until this Friday. Chants of “Jew Lives Matter” could be heard from the footage obtained by SV News.

A small fire was started and participants began burning their face masks. The fire did not spread and remained in the center of the street. Firefighters were called and it was then extinguished.

Police began to engage in “crowd control,” with video showing them pushing protestors. One protestor is now in critical condition, but it is unclear what caused his injuries.

Ricochet Editor Bethany Mandel said of the police’s methods, “Let’s be clear here: if the police were actually doing this for public health reasons, they wouldn’t be doing crowd control like this. This ain’t about a virus.”

Let’s be clear here: if the police were actually doing this for public health reasons, they wouldn’t be doing crowd control like this. This ain’t about a virus. https://t.co/M27qax6Z9P

Yesterday, the Jewish activist group Agudath Israel announced that it intended to file a court injunction after Cuomo placed the new limitations on temples.

Cuomo’s press briefing on Monday appeared to be the source of the Brooklyn protests and Agudath Israel’s motion. They pointed to the fact that the Jewish communities were singled out and that Cuomo apparently was caught in a lie about one of the pieces of evidence he used against the Jewish community.

“These are pictures from the past couple of weeks and these are just emblematic. You’ve all seen pictures like this for weeks. What did you think was going to happen?” Cuomo said while displaying photos of Jews convening for a High Holiday.

It was discovered that the photos originated from 2006, yet Cuomo used them to illustrate why the lockdowns were being reinstated in only certain communities.

New York City Councilman Chaim Deutsch urged officials to refrain from heavily associating the hot spots of COVID with the Orthodox community. “I told them, ‘It’s going to increase antisemitism. You’re going to sound like the Jews are spreading the Covid-19 virus,’ but they went ahead anyway,” said Deutsch.