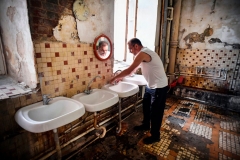 Vladimir Mogilnikov, 62, washes his hands in a communal washing room in a dormitory for the workers of Proletarka textile factory in the town of Tver, 200 kilometres north-west from Moscow on August 8, 2020. (Photo by ALEXANDER NEMENOV/AFP via Getty Images)

(CNSNews.com) - A new survey conducted by Gallup revealed that worldwide only 58% of people reported washing their hands at least five times a day during the pandemic. The Centers for Disease Control and Prevention (CDC) recommended people wash their hands often, among other things, to prevent the spread of COVID-19.

People were asked how many times they washed their hands or used hand sanitizer the previous day, to which 58% said they did so-- with soap and water-- more than five times. Two percent reported not having washed their hands at all.

The poll found that women were universally more likely to have washed their hands five times the day prior than men, with 64% of women compared to only 52% of men. They also found that the likelihood of frequent handwashing rose with education level and urbanization.

Thus, the highest levels of handwashing were found in highly developed countries, and the map reflects this. Countries with poor water, sanitation, and hygiene are at a great risk for disease particularly a pandemic.