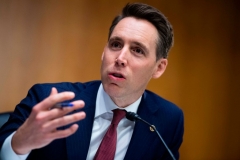 (CNSNews.com) - In light of the recent Supreme Court decision prohibiting employment discrimination against homosexuals and transgenders, Sen. Josh Hawley (R-Mo.) on Tuesday called for religious conservatives to “stand up and speak out.”

Hawley declared that because of the SCOTUS’ decision, the conservative legal project has failed the project’s “core” - religious conservatives. Congress is “terrified” of being held accountable, he said.

“It was written by judges, not by the elected representatives of the people, and it did what this Congress has pointedly declined to do for years now, which is to change the text and the meaning and the application and the scope of a historic piece of legislation,” the senator said.

Throughout his speech Hawley pointed out the decision’s effect, “This decision, this Bostock case and the majority who wrote it, it represents the end of something. It represents the end of the conservative legal movement or the conservative legal project as we know it. After Bostock, that effort as we know it, as it has existed up to now, it's over.”

Within his speech Hawley consistently referred to the conservative legal project or movement as pertaining to the ideals of originalism and textualism. Originalism and textualism are both methods of interpreting the Constitution as according to the Founder’s intent and purpose. Hawley contended that the Bostock decision represented a departure from that interpretation.

Hawley said there is no answer to his question posed because the congressional body, who has been too cautious to legislate, has given the power to legislate the outcome to the Supreme Court.

Everybody knows, every honest person knows that the laws in this country today, they’re made almost entirely by unelected bureaucrats and courts. They are not made by this body. Why not? Because this body doesn't want to make law. That's why not.

So can we be surprised that where this legislator fears to tread, where the Article I body, this body that is charged with the Constitution for legislating refuses to do its job?

"It's time for religious conservatives to bring forward the best of our ideas on every policy affecting this nation. We should be out in the forefront leading on economics, on trade, on race, on class, on every subject that matters for what our Founders called the general welfare, because we have a lot to offer,” he said.