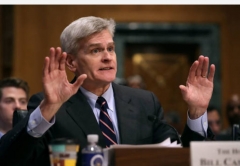 (CNSNews.com) - Asked whether he would support an order allowing biological males who identify as females to use female bathrooms and locker rooms – a campaign promise of presidential candidate Joe Biden – Sen. Bill Cassidy (R-LA) said he would be opposed, because such an order “opens itself up to abuse.”

At the Capitol on Thursday, CNS News asked Senator Cassidy, “Joe Biden says that as president he will require federally funded schools to let biological males who identify as females use female bathrooms and locker rooms. Do you support that?”

“No. If you are a male who identifies as a female, that really opens itself up to abuse,” Cassidy replied.

Sen. Cassidy said he wouldn’t want a male to be able to go into his daughter’s bathroom simply because he “says that he identifies as a female”:

“I don’t want my daughter to have to address that issue, if she goes into a bathroom and there is someone who says that he identifies as a female, I’m not sure she would be comfortable with that.”

Biden, the presumptive presidential nominee for the Democrat party, says on his campaign website that he will, “Ensure young LGBTQ+ people are supported and protected in our schools and college campuses by: Guaranteeing transgender students have access to facilities based on their gender identity.”

Biden promises to issue an order restoring transgender students’ ability to use the facilities of their chosen sex “on his first day in office”:

“On his first day in office, Biden will reinstate the Obama-Biden guidance revoked by the Trump-Pence Administration, which will restore transgender students’ access to sports, bathrooms, and locker rooms in accordance with their gender identity.

“He will direct his Department of Education to vigorously enforce and investigate violations of transgender students’ civil rights.”