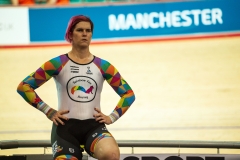 Transgender "female" cyclist Rachel McKinnon has defended her right to compete in women's sport despite accepting trans athletes may retain a physical advantage over their rivals. (Photo by OLI SCARFF / AFP)

In a statement Morse said, “The Supreme Court’s decision in Bostock v. Clayton County erases womanhood. It is the end of women in sports and women’s rights to privacy. Thanks to the Sexual Revolutionaries on the Court, our laws will refuse to distinguish men who say they are women from real women.”

“If you’re born a man, you’ll remain one to your dying day,” she added, “regardless of what you believe or do to your body.”

On Monday, the Supreme Court issued a ruling, 6-3, in favor of Bostock. The decision extended the ban on employment discrimination to homosexuality and transgenderism under Title VII of the Civil Rights Act of 1964. “Title VII prohibits employment discrimination based on race, color, religion, sex and national origin,” explains the U.S. Equal Employment Opportunity Commission.

In this case, six of the justices argued that “sex” does not just mean male or female but also means sexual identity, such as homosexual or transgender. While Chief Justice John Roberts and Associate Justice Neil Gorsuch sided with the liberals on the court, conservative justices Clarence Thomas, Samuel Alito and Brett Kavanuagh argued that “sex” refers to biology, male or female, and under the Civil Rights Act does not refer to a gender identity.

The president of the pro-LGBT Human Rights Campaign (HRC), Alphonso David, said of Monday’s ruling, “This is a landmark victory for LGBTQ equality. No one should be denied a job or fired simply because of who they are or whom they love.”

“For the past two decades, federal courts have determined that discrimination on the basis of LGBTQ status is unlawful discrimination under federal law,” said David. “Today’s historic ruling by the Supreme Court affirms that view, but there is still work left to be done.”