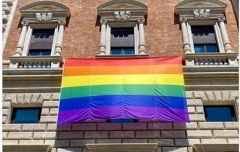 The U.S. Embassy at the Vatican displayed the rainbow flag on Wednesday, June 1, a date which the U.S. officially recognizes as the beginning of LGBTQ+ Pride Month.

“Today is the start of #Pride Month. The United States respects and promotes the equality and human dignity of all people including the LGBTQIA+ community,” a tweet from the U.S. Embassy in the Holy See (@USinHolySee) on Thursday at 6:33 A.M. stated, followed by several hashtags including #PrideMonth #AllInclusive and #Pride2022.

Today is the start of #Pride Month. The United States respects and promotes the equality and human dignity of all people including the LGBTQIA+ community. #PrideMonth #AllInclusive #Pride2022 pic.twitter.com/6VgN9R8c3J

Pride Month is the month of June, a month for the LGBTQ communities of the world to gather and celebrate themselves, CNN explains:

“Pride gatherings are rooted in the arduous history of minority groups who have struggled for decades to overcome prejudice and be accepted for who they are.”

Last June, in remarks celebrating Pride Month and the “generations” of LGBTQ+ Americans, Biden announced that a White House hallway would be “lit with rainbow colors of Pride.”

On Wednesday, the White House reportedly issued a statement in preparation for Pride Month, announcing that Pride flags will be flown at all U.S. embassies and cabinet agencies around the world.

On Tuesday, The White House issued a proclamation calling on all Americans to “wave their flags of pride”:

“Now, therefore, I, Joseph R. Biden Jr., President of the United States of America, by virtue of the authority vested in me by the Constitution and the laws of the United States, do hereby proclaim June 2022 as Lesbian, Gay, Bisexual, Transgender, Queer, and Intersex Pride Month. I call upon the people of the United States to recognize the achievements of the LGBTQI+ community, to celebrate the great diversity of the American people, and to wave their flags of pride high.”

The U.S. Department of State also tweeted its support of Pride Month:

The United States Embassy rests in the center of the Catholic Church at the Vatican, where Pope Francis, the head of the Church, resides.

Pope Francis has spoken out against gender theory, calling it “dangerous,” as it seeks “to destroy at the root that creative project that God wanted for each of us– diversity and distinction- by making everything homogenous and neutral.” Francis has described gender theory as an “ideological project,” one which “does not take reality into account” and is a “great enemy” of marriage.

According to the Catechism of the Catholic Church, homosexual acts cannot be condoned, because they are contrary to natural law and described in Scripture as acts of “grave depravity”:

“Homosexuality refers to relations between men or between women who experience an exclusive or predominant sexual attraction towards persons of the same sex. It has taken a great variety of forms through the centuries and in different cultures. Its psychological genesis remains largely unexplained. Basing itself on Sacred Scripture, which presents homosexual acts as acts of grave depravity, tradition has always declared that ‘homosexual acts are intrinsically disordered.’ They are contrary to the natural law. They close the sexual act to the gift of life. They do not proceed from a genuine affective and sexual complementarity. Under no circumstances can they be approved.”