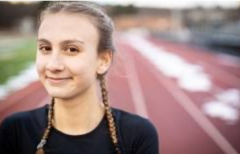 (CNS News) – Although the Democrat majority on the Senate Judiciary Committee blocked female athletes who oppose the Equality Act from testifying by video at Wednesday’s hearing on the subject, the ladies’ testimony was submitted into the record. Their testimony explained why competing against biological males (transgender “females”) is unfair and likely will destroy women’s sports.

The Equality Act, which passed the House (224-206) and is now in the Senate, would amend the 1964 Civil Rights Act to include protections for “gender identity” and “sexual orientation.” In practice this would mean, among other things, that transgender “females” (biological males) would be allowed to play on girls’ sports teams and use their bathrooms, locker rooms, and showers.

Chelsea Mitchell, who ran track at Canton High School in Connecticut, said in her written testimony, “I lost four state championships because our state policy ignores the biological reality and physical advantages of males over females in sport.”

“The Connecticut Interscholastic Athletic Conference’s policy inflicted unfair competition on me and my fellow female athletes,” she said.  “I was forced to compete against biological male students every year of my high school sports experience. It was demoralizing. I rarely got to compete in fair races and lost awards and opportunities for recognition at a time when it was most crucial for college recruitment.”

“Competing in sports instilled me with confidence and hope that I can succeed in every aspect of my career, schooling, and social life,” said Mitchell.  “However, that confidence was stolen from me every time I lined up to compete against biological males. Even though I was one of the fastest girls in Connecticut, I knew that I didn’t have a fair chance to win if biological males were in the female category. I felt defeated before the race even began.”

“It isn’t fair and it isn’t right,” added Mitchell.  “We need separate sports categories based on biological sex in order to fairly compete. This is what Title IX was intended to protect and preserve. If biological males are permitted to compete in female sports, there will no longer be female sports as we know it.”

Chelsea Mitchell is part of a lawsuit with two other female athletes, Selina Soule and Alanna Smith, who are challenging Connecticut's Interscholastic Athletic Conference decision to allow transgender "females" to play in girls' sports. They are represented by the Alliance Defending Freedom, and the case is now at the appellate court level.

Alanna Smith, a junior at Danbury High School and a track athlete, said in her written testimony, “In high school, I have set records and achieved some personal goals while other goals are hopefully still to be fairly realized. It is hard work, but every hour spent training can shorten my time around the track and put me ahead of my competitors.”

“When I was a freshman in high school everything changed,” said Smith.  I knew I’d be racing against a male who identified as a female at the State Open. I knew I had no chance of winning despite the hours of training and knowing my personal bests in each event. I was defeated before stepping onto the track. I knew it wasn’t fair to me or to any of the other girls competing at the State Open. I knew I had biologically-advantaged competition running against me.”

“It has taken me years to develop the personal confidence and sense of belonging I now feel on my track and field team,” said the young female athlete.  “I believe everyone should be treated with dignity and respect. At the same time, the addition of males to girls’ sports fills me with a sense of defeat before I even get set up in the blocks. What about dignity and respect for girls like me?”

“We train so hard to compete, and yet the biological males that compete against us rob us of titles, podium spots and opportunities to advance because they have inherent physical advantages over us,” she added.  “That biological unfairness doesn’t go away because of what someone believes about gender identity…. Males will always have a physical advantage over females. Isn’t that why we have women’s sports in the first place?”

Selina Soule, another female athlete, submitted her testimony to the Judiciary Committee. “Track means everything to me,” she wrote. “I would wake up every day and go through high school, just waiting to get to the track, waiting to run, waiting to jump. I spent countless hours training to shave fractions of a second off my time so I could win—so I could be the best. However, my chances of being first – of being the best – were shattered.”

“The Connecticut Interscholastic Athletic Conference began allowing boys who identify as girls to compete in girls’ sports,” said Soule.  “As a result, during all four years of high school, I was forced to compete against two biological boys identifying as girls. In that time, these two biological males won 15 women’s state championship titles in track and field, titles that were previously held by nine different girls. And in just three years these biological males set 17 new individual meet records—records which we girls had no hope of breaking.”

“If changes are not made soon, we are facing the complete eradication of women’s sports,” said Soule.  “Boys will always have a physical advantage over us girls, and that is why we have women’s sports in the first place. Science and common sense shows us that boys are, on average, bigger, stronger, and faster than girls. It’s simple biology. That is why it is fundamentally unfair to let boys who identify as girls come in and dominate any sport.”

“No one thinks it is fair, but everyone is afraid of retaliation from the media, school officials, and bullies online,” added Soule.

In a statement, David said, “This Wednesday will be a historic opportunity to advance equality for all. For the first time in our decades-long fight for equal rights, the Senate will host a hearing on the Equality Act and I welcome this important opportunity to highlight the need for this critical legislation. The Equality Act is a unifying issue for our nation enjoying support from more than two-thirds of Americans and an unprecedented number of businesses who believe that not only is achieving equality the right thing to do but that it is also good business. Thank you Chair Durbin for holding this hearing, and inviting me to participate.”

The bill proposed by Missouri would affect the participation of transgender athletes by requiring them to identify by the gender on their birth certificate.