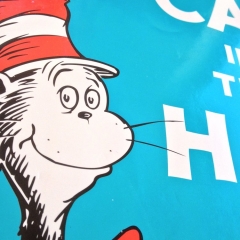 (CNS News) -- Six Dr. Seuss books will no longer be published because they portray people “in ways that are hurtful and wrong,” Dr. Seuss Enterprises said in a statement on Dr. Seuss’ birthday, which is today, March 2.  Seuss died in 1991 at the age of 87.

“Ceasing sales of these books is only part of our commitment and our broader plan to ensure Dr. Seuss Enterprises’s catalog represents and supports all communities and families,” the group said in the statement.

The six books that will no longer be published are And to Think That I Saw It on Mulberry Street, If I Ran the Zoo, McElligot’s Pool, On Beyond Zebra!,  Scrambled Eggs Super!, and The Cat’s Quizzer.

According to a study in Research on Diversity in Youth Literature, some of Dr. Seuss’s books depict racial stereotypes.  The study is entitled, “The Cat is Out of the Bag: Orientalism, Anti-Blackness, and White Supremacy in Dr. Seuss’ Children’s Books.” The study was conducted by Katie Ishizuka, author of The Conscious Kid Library, and Ramon Stephens, with the University of California-San Diego.

Ishizuka and Stephens also operate “The Conscious Kid,” a policy group dedicated to “equity and promoting healthy racial identity development in youth,” and “taking action to disrupt racism in young children.” The group recommends and provides myriad books that it describes as “anti-racist” literature.

“In the fifty Dr. Seuss children’s books, 2,240 human characters are identified,” according to the study. “Of the 2,240 characters, there are forty-five characters of color representing 2% of the total number of human characters.”

“In addition, some of Dr. Seuss' most iconic books feature animal or non-human characters that transmit Orientalist, anti-Black, and White supremacist messaging through allegories and symbolism,” claim the authors. “These books include The Cat in the Hat; The Cat in the Hat Comes Back; The Sneetches; and Horton Hears a Who!

According to the study, the Cat in the Hat character was inspired by a black woman, Annie Williams, who operated the elevator at one of Dr. Seuss’s publishers. “The Cat was also influenced by actual blackface performers and minstrelsy, which is seen in both the Cat’s physical appearance, and the role he plays in the books,” claim the authors.

As their research continued, Ishizuka and Stephens lobbied the National Education Association’s (NEA) Read Across America Advisory Committee (RAA) in 2017 to move away from its focus on Dr. Seuss. The NEA is a left-wing teachers union.

“For twenty years, the celebration was centered around Dr. Seuss' children’s books and the author himself,” state the authors. “We advocated that they reconsider their twenty year focus on Seuss and use their platform to promote anti-racist diverse books by authors of color. The NEA committed to start transitioning away from Dr. Seuss, change RAA’s theme to ‘Celebrating a Nation of Diverse Readers,’ and use the event as an opportunity to promote social justice.”

“For the first time in twenty years, they removed all Dr. Seuss books from their annual Read Across America Resource Calendar, and featured all diverse books and authors at their RAA events in 2018,” said Ishizuka and Stephens.

Theodor Seuss Geisel, otherwise known as Dr.Seuss, has sold over 650 million children’s books worldwide making him one of the most popular children’s authors in the world.

Read Across America Day has been celebrated annually on March 2, the author’s birthday, for the past 23 years as a way to get children excited about reading.

Earlier this week, Virginia schools in Loudoun County, just west of D.C., made the decision to shun Read Across America Day after a push from the Southern Poverty Law Center’s Learning For Justice Activists.

“A prominent Virginia school district has taken marching orders and ordered its schools to avoid ‘connecting Read Across America Day with Dr. Seuss,’” reported The Daily Wire.  “Loudoun County Public Schools, one of the nation’s most affluent school districts, announced that it will no longer recognize Dr. Seuss on his birthday. … T]he school district said that Dr. Seuss’s children’s books contain ‘racial undertones’ that are not suitable for ‘culturally responsive’ learning.”

“Realizing that many schools continue to celebrate ‘Read Across America Day’ in partial recognition of Dr. Seuss’ birthday, it is important for us to be cognizant of research that may challenge our practice in this regard,” the school district said. “As we become more culturally responsive and racially conscious, all building leaders should know that in recent years there has been research revealing radical undertones in the books written and the illustrations drawn by Dr. Seuss.”