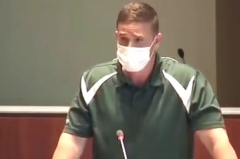 Cross filed a suit after officials suspended him for publicly voicing his objections to a proposed policy during the public comment period of a May 25 Loudon County Public School (LCPS) Board meeting. The lower court ruled that the school’s actions were likely unconstitutional.

Cross had been placed on administrative leave after he expressed his concerns at a May 25 school board meeting that a transgender policy under consideration violated his religious beliefs and was harmful to children.

“I will not affirm that a biological boy can be a girl and vice versa because it is against my religion,” Cross stated during the public comments portion of the meeting. “It’s lying to a child. It’s abuse to a child. And it’s sinning against our God.”

Two days later, Cross was suspended based on the claim that he caused “significant disruption” at the school, “including multiple complaints and parents requesting that Mr. Cross have no interaction with their children because of his comments,” according to a LCPS representative.

In response, ADF filed a complaint seeking an injunction against the suspension and a jury trial to decide the case.

On June 8, the Circuit Court of the County of Loudoun awarded a temporary injunction reinstating Cross to his teaching position, ruling that he was likely to succeed based on the merits of his claim that his First Amendment right to free speech as a private citizen had been violated by the LCPS.

Subsequently, LCPS appealed, claiming that the circuit court erred in balancing and issuance of an injunction.

ADF addressed this claim in its brief with the Virginia Supreme Court, arguing that the lower court properly weighed the two factors and that LCPS is merely trying to get a different court to come to a different decision.

“Because Petitioners merely ask this Court to redo those balancing tests and come to a different result, this Court should deny the petition,” reads the brief.

“Petitioners ultimately disagree with the balance the trial court struck, but they identify no legal error in the decision below,” ADF’s brief argues.

Should the Virginia Supreme Court decline to hear this case, the trial of Cross v. Loudoun County Public Schools will likely be set for the fall of this year.