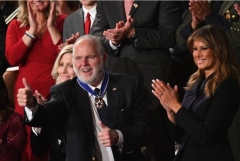 Rush Limbaugh in the gallery of the House of Representatives after being awarded the Medal of Freedom and acknowledged by President Donald Trump as he delivered his State of the Union Address, Feb. 4, 2020. (Photo by MANDEL NGAN/AFP via Getty Images)

(CNSNews.com) - Rush Limbaugh, the great conservative leader who revolutionized American talk radio, has died at the age of 70 after a battle with lung cancer.

Limbaugh started his nationally syndicated radio program in 1988, and quickly became one of the most influential voices in American public policy and politics.

“Losing a loved one is terribly difficult, even more so when that loved one is larger than life,” said Limbaugh’s wife Kathryn in announcing his death. “Rush will forever be the greatest of all time.”