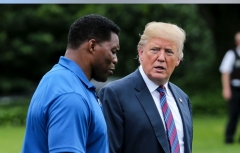 (CNSNews.com) - College Football Hall of Famer Herschel Walker sent out a tweet on Monday afternoon saying that he was looking forward to speaking that night at the Republican National Convention.

Walker is scheduled to speak at the convention tonight after Rep. Jim Jordan of Ohio.

Walker’s tweet forwarded another tweet that had been sent out by Paris Dennard, a senior communications adviser to the Republican National Committee.

“Talk about a full circle moment!” he said.