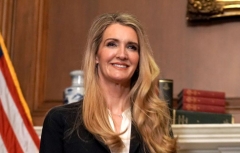 (CNS News) -- Georgia Senators Kelly Loeffler (R) and David Perdue (R), who both face run-off elections in January, have called on Georgia Secretary of State Brad Raffensperger to resign, citing the "many failures" in the Georgia elections this year.

"The management of Georgia elections has become an embarrassment for our state," said Loeffler and Perdue in a joint statement issued today. "Georgians are outraged, and rightly so.

"We have been clear from the beginning: every legal vote cast should be counted. Any illegal vote must not. And there must be transparency and uniformity in the counting process.

"This isn’t hard. This isn’t partisan. This is American. We believe when there are failures, they need to be called out -- even when it’s in your own party.

"There have been too many failures in Georgia elections this year and the most recent election has shined a national light on the problems. While blame certainly lies elsewhere as well, the buck ultimately stops with the Secretary of State.

"The mismanagement and lack of transparency from the Secretary of State is unacceptable. Honest elections are paramount to the foundation of our democracy.

"The Secretary of State has failed to deliver honest and transparent elections. He has failed the people of Georgia, and he should step down immediately.”

In a response, Secretary Raffensperger, a Republican, said, "Earlier today Senators Loeffler and Perdue called for my resignation.  Let me start by saying that is not going to happen. The voters of Georgia hired me, and the voters will be the one to fire me. As Secretary of State, I’ll continue to fight every day to ensure fair elections in Georgia, that every legal vote counts, and that illegal votes don’t count."

He continued, "I care about counting each and every legal vote…and assuring that illegal votes aren’t counted. ... Was there illegal voting [on Nov. 3]? I am sure there was. And my office is investigating all of it. Does it rise to the numbers or margin necessary to change the outcome to where President Trump is given Georgia’s electoral votes? That is unlikely."

"One thing I have learned in my time as Secretary of State is that a lot of difficulties in administering elections are caused by federal law," said Raffensperger. "Federal law, not state law, is what makes it so difficult to keep clean voter rolls. Federal law, not state law, is what allows people to register to vote before a runoff even if they weren’t registered for the general election."

"Now that Senators Perdue and Loeffler are concerned about elections, hopefully they can fix these federal laws," he said.

To read Raffensperger's complete response, which is lengthy, click here.