Cordileone: ‘I Want to Help Her to Understand That It is Unacceptable to Kill Babies in the Womb’ 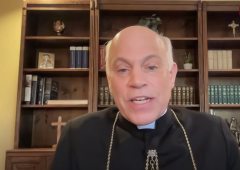 (CNSNews.com) - Archbishop Salvatore Cordileone of San Francisco, who publicly announced yesterday that House Speaker Nancy Pelosi should not take Holy Communion until she repudiates her support for abortion, said in an interview on Friday that he wanted to “help her understand that it is unacceptable to kill babies in the womb.”

Cordileone made the statement in a conversation with host Gloris Purvis on the “Behind the Story” podcast.

“I want to help her to understand that it is unacceptable to kill babies in the womb and the harm so often it does to women,” said Cordileone.

“Those of us in pastoral ministry, we encounter women who have gone through this experience, and we understand how so often they feel alone, afraid, abandoned,” he said. “And they really need support and love to help make a happy decision, a decision for life.

“So the rose and rosary campaign was to help sensitize—she [Pelosi] has, it seems to me, a very maternal heart,” he said. “She loves speaking about her five children, right?—to sensitize her to that. And also to convey that—I know people will accuse me of being political, but this is not political at all. It’s pastoral.”

“I cannot in my conscience allow the situation to continue and cause this scandal,” he said in the podcast.