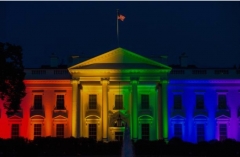 (CNSNews.com) - The Census Bureau this month released estimates of the percentage of adults in each state and the District of Columbia who are Lesbian, Gay, Bisexual or Transgender (LGBT) and it turned out that Washington, D.C. is more LGBT than any state.

In fact, according to the Census Bureau, 14 percent of adults 18 and older in D.C. are LBGT. That means approximately 1 in 7 adults in the nation’s capital is LGBT.

Among the states, Colorado had the highest percentage (11.0%) of LGBT adults.

It was followed by Nevada and Arizona, which each has an adult population that is 10.6 percent LGBT.

Mississippi is the state where LGBTs make up the lowest percentage of the population (4.7 percent).

These estimates of the states’ LGBT population come from the Census Bureau’s Household Pulse Surveys conducted from July 21 to September 13, 2021.

The survey asked respondents: “What sex were you assigned at birth, on your original birth certificate? Do you currently describe yourself as male, female or transgender?” It also asked: “Which of the following best represents how you think of yourself? Bisexual. Gay or lesbian. Straight. Something else. I don’t know.”

Here is a graphic from the Census Bureau website: