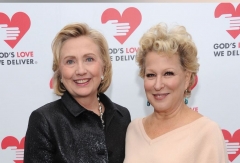 (CNSNews.com) - Singer Bette Milder sent out a series of tweets on Tuesday evening asking: “But what if Trump won’t concede defeat?”

“On his present trajectory, Trump is heading for a whopping defeat in Nov.,” Midler tweeted.

“But what if Trump won’t concede defeat?” Midler said.

“That is a nightmare scenario for our economy that could make the showdown over Florida’s hanging chads seem like a grade-school dispute by comparison,” she said.

“Trump is already laying the foundation to dispute the election outcome w/incessant claims that ‘Mail-in Ballots will lead to MASSIVE electoral fraud and a RIGGED 2020 Election,’” she said.

“Election officials label such concerns as ‘preposterous’ & ‘false.’ But they will serve as an excuse for GOP to purge voter-registration rolls. Whatever it takes to win,’” she said.

“I predict that’s exactly what he will do,” Midler said.