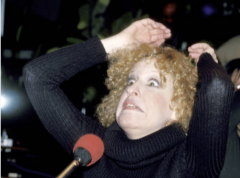 (CNSNews.com) - Singer Bette Midler sent out a tweet on Wednesday evening address to “Donnie” that described the president voice in graphic terms and reflected on how long Americans could “resist coring out their own ass***** with an ice auger.”

“Every day is a natural experiment in determining how long 300 million people can resist coring out their own ass***** with an ice auger.

“Every time I hear a snippet of your Queens-tinged banshee larynx farts, I want to scream!” Midler wrote.