Attorney General’s Report: Cuomo ‘Slid His Hand Up Her Blouse, and Grabbed Her Breast’ 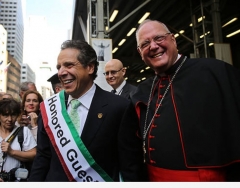 (CNSNews.com) - The office of New York Attorney General Letitia James published a report today based on its investigation into allegations of sexual harassment by Democratic Gov. Andrew Cuomo that concluded, among other things, that Cuomo “grabbed” the breast of one of his female assistants.

“The Governor then returned to Executive Assistant #1 and slid his hand up her blouse, and grabbed her breast, ‘cup[ping her] breast’ over her bra,” said the report.

The report then said that “Executive Assistant #1 testified:

‘I mean it was—he was like cupping my breast. He cupped my breast. I have to tell you it was—at the moment I was in such shock that I could just tell you that I just remember looking down and seeing his hand, seeing the top of my bra that I had to the point I could tell you doesn’t really fit me properly, it was a little loos, I just remember seeing exactly that.’

The report continued: “In response, Executive Assistant #1 pulled away from the Governor and said, ‘You’re crazy.’”

“Governor Cuomo denied having ever touched Executive Assistant #1’s breasts,” said the attorney general’s report. “He testified: ‘To touch a woman’s breast who I hardly know, in the Mansion, with ten staff around, with my family in the Mansion, to say ‘I don’t care who sees us.’ … I would have to lose my mind to do such a thing.’”

The report continued: “Executive Assistant #1’s allegations are that the incident occurred in the smaller of the Governor’s private offices on the second floor, which connects to his larger office and bedroom and away from the Mansion’s first-floor common areas, and is separated from the second floor common area by doors; nor is there any evidence that there were ‘ten’ Mansion staff in the vicinity of his second-floor office that day.”

“Specifically, with respect to physical contact with complainants, we find that the Governor engaged in the following forms of offensive touching, among others:

“—On November 16, 2020, the Governor hugged Executive Assistant #1 and then reached under her blous and grabbed her breast.

“—On multiple occasions in 2019 and 2020, the Governor engaged in close and intimate hugs with Executive Assistant #1 during which he, on occasion, grabbed her butt.

“—On December 31, 2019, the Governor took a ‘selfie’ with Executive Assistant #1, during which he put his hand on and then rubbed and grabbed her butt.”