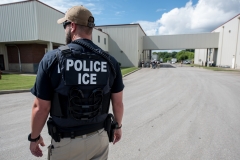 (CNS News) -- The U.S. Immigration and Customs Enforcement (ICE) agency announced on Monday that it had arrested 302 non-citizen sex offenders so far as part of its Sex Offender Arrest and Removal program, popularly known as Operation SOAR.

“Our officers have prioritized the arrest of non-citizens who pose the greatest threat to the security and safety of our communities," said ICE Acting Director Tae Johnson.

"By focusing our resources on those who have committed sex crimes and demonstrated predatory behavior, we reinforce our steadfast commitment to enhancing public safety across the United States," he added.

According to ICE.gov, the "Sex Offender Arrest and Removal (SOAR) is a coordinated foreign-born sex offender enforcement operation that builds on ICE’s ongoing efforts to target and remove these egregious criminal non-citizens from our communities."