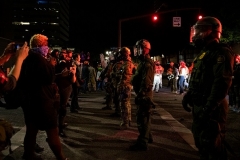 Police and protestors stand off in Portland, Oregon. (Photo by Alisha Jucevic/AFP via Getty Images)

(CNSNews.com) – After 80 days of protests and riots in Portland, Oregon, Multnomah County’s new district attorney has announced that charges will be dropped for the majority of those arrested, citing a need to “acknowledge and address centuries of racism and oppression that are manifested in mass incarceration.”

Mike Schmidt said at a briefing the revised policy was needed because some protestors have been breaking the law because of frustrations.

“The protestors are angry, yes, deeply frustrated with what they perceive to be structural inequities in our basic social fabrics, and this frustration can escalate to levels that violate the law,” Schmidt said.

“Some of those violations are impermissible by any standard, resulting in physical violence, injury and worse,” he said. “Others represent the instinctive reactions of people who have been gassed repeatedly, who have been struck with kinetic projectile weapons, and who have seen other protestors arrested in ways that they deeply disapprove of”

“This policy acknowledges that centuries of disparate treatment of our black and brown communities have left deep wounds and that the healing process will not be easy or quick.”

A four-page document, entitled “Policy Regarding Protest Related Cases,” provides detail about which crimes will not be punished, along with the reasoning behind the decision

Members of our community have taken to the streets every night since the murder of George Floyd to express their collective grief, and anger and frustration over not just that senseless act of violence, but the countless other abuses People of Color have endured in our country throughout history.

The demands for change go beyond calling for an end to police violence and encompass the need for all of us to acknowledge and address centuries of racism and oppression that are manifested in mass incarceration, economic inequality, educational disadvantages, and disparities in health care that have allowed COVID-19 to ravage our communities of color.

The document lists categories of cases where criminal charges will be dismissed.

“We will presumptively decline to charge cases where the most serious offenses are city ordinance violations and crimes that do not involve deliberate property damage, theft, or the use or threat of force against another person,” it states.

Charges that will be dropped are:

“Committing a crime is different from demonstrating,” he said in a statement. “The arrests we make often come after hours of damage to private property, disruption of public transit and traffic on public streets, thefts from small businesses, arson, burglary, attacks on members of the community, and attacks against police officers.”

“Meanwhile we have police officers who have been injured in the line of duty on multiple occasions, we have individuals who are trying to set them on fire, and this district attorney is refusing to prosecute,” said Sutton, a 33-year law enforcement veteran.

“We are seeing this district attorney become a political animal,” he said. “This is not about justice.”