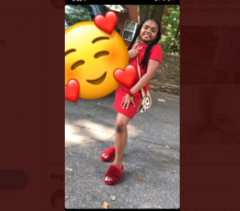 Eight-year-old Secoriea Turner, who was shot and killed allegedly by protesters on July 4, 2020. (Twitter)

(CNS News) – The father of an 8-year-old girl who was shot and killed on July 4, allegedly by protesters camped out at a burned-down Wendy’s restaurant in Atlanta, Ga., spoke at a press conference on Sunday and remarked, “They say, ‘black lives matter.’ You killed your own, you killed your own this time."

The Wendy’s was the restaurant where, in the parking lot, police shot and killed Rashard Brooks on June 12. His death sparked rioting and the Wendy’s was set on fire. Since that incident, protesters have camped at the location.

Secoriya Williamson, father of 8-year-old Secoriea Turner, addressed the public after his daughter was shot and killed last night in Atlanta by armed protesters. pic.twitter.com/J8zngZsjaQ

“Authorities said Secoriea Turner [the 8-year-old girl] was in the car with her mother and another adult when the driver tried to drive through illegally placed barricades to get to a parking lot in the area,” reported FOX6 Now. “Armed individuals blocking the entrance opened fire on the vehicle, striking it multiple times and striking the child, police said. The driver took Secoriea to Atlanta Medical Center but she did not survive.”

It was her mother, Charmaine Turner, who rushed her daughter to the hospital. “She died in my arms,” Turner said.

At a press conference on July 5, Charmaine Turner said, “They started shooting at my car before we could even make a U-turn. Shot my tires out. … We understand the frustration with Rayshard Brooks. We didn’t have anything to do with that. We’re innocent. My baby didn’t mean no harm.”

The deceased girl’s father, Secoriya Williamson, also spoke.  “They say, ‘Black lives matter.’ You killed your own, you killed your own this time,” he said. “Killed because of a [protest] barrier?  They killed my baby because she crossed a barrier, to make a U-turn, you killed a child. She didn’t do nothing to nobody.”

“They say ‘black lives matter,” he repeated and then shook his head.

People hold signs toward traffic outside a burned Wendys restaurant on the second day following the police shooting death of Rayshard Brooks in the restaurant parking lot June 14, 2020, in Atlanta, Georgia. (Photo by ELIJAH NOUVELAGE/AFP via Getty Images)

Atlanta Mayor Keisha Bottoms urged anyone with any information about the identity of the shooters to come forward. “I am asking you to please, honor this baby’s life,” Bottoms said, “These people are a danger to all of us.”

“You shot and killed a baby,” said Bottoms. “And there wasn’t just one shooter, there were at least two shooters.”

“You can’t blame this on a police officer,” she said. “You can’t say this about criminal justice reform. This is about some people carrying some weapons who shot up a car with an 8-year-old baby in the car for what?”

The mayor also said that the area where Turner was killed will be cleared of protesters. “This discussion, this meditation -- it’s over,” she said. “At a point where an eight-year-old baby is killed, the discussions have ended.”

The day after Turner’s death, three more individuals were shot in the same area, with one of those being fatal.

A $10,000 reward is being offered for information leading to the apprehension of the shooters who killed Turner.