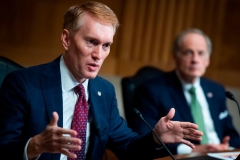 (CNSNews.com) - When asked whether biological males who claim to be female should be allowed to participate in sports for biological females, Sen. James Lankford (R-Okla.) said transgender participation “violates the spirit of what Title IX was all about,” adding that Title IX was about ensuring there is equal access for men and women to get into sports.

At the U.S. Capitol on Thursday, CNSNews.com asked, “When the House Judiciary Committee considered the Equality Act, it rejected an amendment that said the act would not require biological males in biological female sports competition. Should biological males who say they identify as females be allowed to play girls’ sports?”

“Competing in that takes that away, takes the competition away. We’ve already seen that in states, multiple states, where we have record holders for the state be someone that is biologically the other sex. I think that takes away competition.,” Lankford said.

“I think that violates the spirit of what Title IX was all about, to be able to make sure that we have equal access for men and women to get into sports, and so that was never really debated. Obviously, the Equality Act claim did that. Then it came over here, and that became an issue as well,” he said.

“And it was one of the things I talked about on the floor last week when they tried to UC [unanimous consent] the Equality Act was say, hey this is still unresolved, and there are plenty of folks that do women’s sports that want to make sure it's an equal playing field for them,” Lankford said.

The Equality Act was passed in the House on May 17, 2019. It was sent to the Senate where it has yet to be voted on. The bill prohibits “discrimination based on “sex, sexual orientation, and gender identity in a wide variety of areas including public accommodations and facilities, education, federal funding, employment, housing, credit, and the jury system.”

Rep. Greg Steube (R-Fla.) proposed an amendment to the Equality Act that would prevent forcing female athletes to compete with biological males.

During a call for a procedural vote on the amendment, Steube stated that nothing in the law “may be construed to diminish” existing protections under Title IX of the Civil Rights Act, which prohibits sex discrimination in education programs that receive federal funding.

Title IX is a law which states, “No person in the United States shall, on the basis of sex, be excluded from participation in, be denied the benefits of, or be subjected to discrimination under any education program or activity receiving Federal financial assistance.”

Lankford brought up the harmful effects of the Equality Act on Title IX and pointed to multiple state records set by someone that is biologically of the opposite sex.

In Connecticut, a transgender person who is a biological male set State Open records in the 100 and 200-meter race in early June 2018.

In May 2019, a biological male who identified as a woman set records for age and weight class but was later stripped of the title as a powerlifter after receiving backlash.