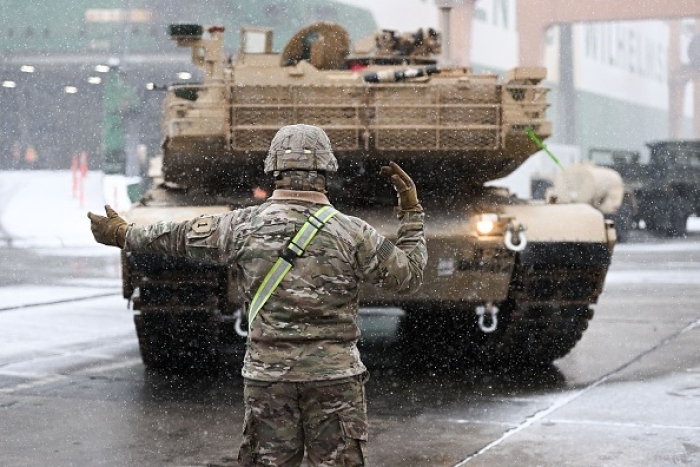 A U.S. Army soldier directs an M1A2 Abrams battle tank upon its arrival in Poland for training exercises in December 2022. (Photo by MATEUSZ SLODKOWSKI/AFP via Getty Images)

The New York Times says the Biden White House is expected to announce, as early as today (Wednesday), that it is sending dozens of the tanks, as many as 30, despite earlier protestations that the Abrams -- a very sophisticated armored weapon system -- has unique supply chain (fuel) requirements as well as maintenance and training/operation requirements.

Wednesday happens to be Zelensky's birthday.

John Kirby, the national security spokesman for the Biden White House, told CNN Tuesday night he wouldn't get ahead of a decision that hasn't been announced yet.

"I would just tell you that, again, with any advanced system, you have to factor in things like supply chain and maintenance time. And how often can you keep them operational, and how do you use them effectively. And you know, should there -- whatever tanks that get provided to Ukraine, certainly that will have to be factored in.

"Whether it's an American tank or anybody else's tank -- there is talk about -- the Brits are going to contribute these Challenger tanks. There's talk about perhaps other nations may provide Leopard tanks, the German-made tanks. All of them require unique maintenance and operational skills that the Ukrainians would just have to become adept at.

"And yes, that absolutely affects, how much do you give, how fast do you give, and how and on what time frame the troops are trained on them and they're used in the actual battle."

The United States has been pressing Germany to supply Ukraine with its Leopard 2 tanks, but German Chancellor Olaf Scholz, until now, has balked at the request, reportedly worried about acting unilaterally and provoking Russia.

According to The New York Times:

"Defense Secretary Lloyd J. Austin III has now come around to the view that committing to sending American tanks is necessary to spur Germany to follow with its coveted Leopard 2 tanks. Officials at the State Department and the White House argued that giving Germany the political cover it sought to send its own tanks outweighed the Defense Department’s reluctance, the officials said."

On Wednesday morning, Scholz announced that Germany will send Leopard 2 tanks to Ukraine.

Anatoly Antonov, Russia's ambassador to the U.S., has warned the U.S. that supplying Ukraine with battle tanks would be a "blatant provocation."

Is it also an escalation? Kirby addressed that question Tuesday night:

"But look, let's make no mistake. The only party that's escalated the war is Russia. They started it, and they have been escalating it ever since. I mean, we don't talk about it as much in the last few days, but they're still using cruise missiles and drones to hit civilian targets and infrastructure, knock out the lights and the water while the Ukrainians are suffering through a brutal winter.

"We are going to make sure Ukraine can defend itself today, tomorrow and every other day. And we obviously recognize that Mr. Putin could be using the winter to re-group, re-arm, re-equip, and find manpower for his forces for when the weather gets better.

"I mean, the fighting is still ongoing. It hasn't stopped, but we certainly expect as spring comes, you could see the Russians want to go on the move again. They have not surrendered their larger strategic goals inside Ukraine.

“So we have got to make sure that we are using the time effectively in front of us to make sure that Ukraine can be ready for that, as well as quite frankly, Anderson, making sure that they are also ready and able to go on the move when the weather improves."